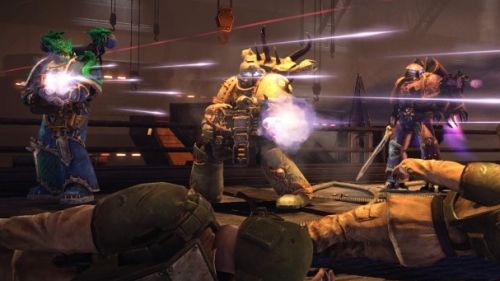 Warhammer 40k: Space Marine gives players a chance to explore their Chaotic side today.  The "Chaos Unleashed" pack has hit the downloadable market.  This will allow you to take the role of Chaos Space Marines in the game's four player co-op mode, Exterminatus.  In this mode you'll battle from arena to arena against Orks and the Forces of Man. The pack also includes three new maps, which brings the game's total MP maps up to seven.  The "Chaos Unleashed" pack is going for 800 MSP on Xbox LIVE and $9.99 on Steam and the PSN.

Space Marine is also getting a Capture the Flag mode today, absolutely free.  Thanks, Santa!  There are also a number of new armor skins available for download, but all you really need to know is that the Legion of the Damned skin will cost you $3 bucks, or 240 MSP.  You can see pics of the four available skins below. Legion of the Damned Veteran They all cost the same price, but c'mon, man, you know you're going to get one with the skull helmet.  That's just the way things work.

Space Marine is out now.  The Exterminatus co-op mode is not not on the game disc, but it is free via download.  It supports four player online co-op.  I really like the game, despite it's flaws, and fans of the franchise should check it out.