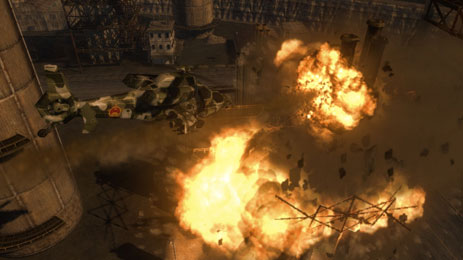 We've been covering Mercenaries 2: World in Flames for some time now, and the wait is almost over.  To celebrate the launch of the game, EA is running a unique and quite memorable promotion.  They have taken over an entire gas station in Los Angeles, and are giving away free fuel to promote Mercs 2's release!  You can even get a mercenary to pump your gas for you, though given the games subtitle, and the above screenshot, you might be risking turning your car into a giant fireball by doing so.  (No real mercenaries will be featured, just actors, but still, it's cool.)  You have to admire the marketing folks who came up with this one.  If you live in LA, hop on over and check it out before they run the pumps dry!  The live feed for the promotion is featured here, and the full press release is available after the break.

PETROL FOR THE PEOPLE – FREE GAS!

WHO: Josh Resnick, President of Pandemic Studios will also be on-hand day of the event from 6am-9am for interviews.

WHAT: Petrol to the People from EA

In celebration of the launch of Mercenaries 2: World in Flames from Pandemic Studios, EA is giving away FREE GAS! On Friday, August 29th, before the North American launch, Pandemic Studios will take over a gas station located at 8489 Beverly Blvd in Los Angeles giving PETROL TO THE PEOPLE, FOR FREE!

The Petrol to the People event will feature Mercenaries 2 branding all around the gas station, promotional flyers being handed out to consumers and will even feature actors dressed up as Mercenaries pumping gas.

Mercenaries 2: World in Flames is an open-world action game set in Venezuela – a lightening rod in the global debate around energy policy and oil production. The games story is ripped from today's headlines.

The story of the game is set in a world where countries rich in oil have found new power. That power corrupts, and in Venezuela, corruption has sparked a political coup. A power hungry tyrant uses Venezuela's oil supply to overthrow the government and turns the country into a war zone.  Players step into the role of a mercenary for whom politics doesn't matter.

The entire event will be webcasted live on Break.com at www.break.com/mercenaries2 beginning at 6am PST.

WHY: To launch Mercenaries 2: World in Flames (http://www.pandemicstudios.com/mercenaries/index.php) for the PlayStation 3, Xbox 360, PC and PlayStation 2