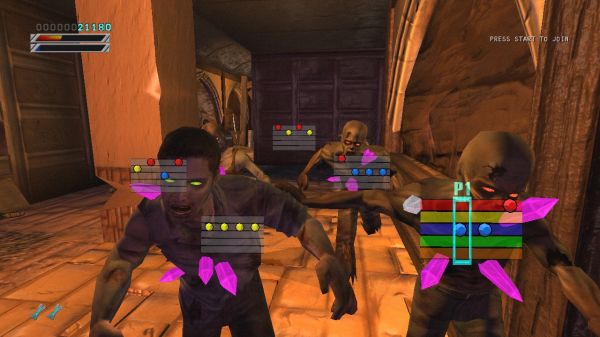 UFO Interactive have just sent a fresh batch of zombie face melting screens and trailers for the other rhythm game coming this fall for the Xbox 360, PlayStation 3 and Nintendo Wii.  Rock of the Dead  features two player co-op in a on rails shooter meets Guitar Hero style game that's all about quick reflexes as much as it is about campy fun.  There's even a celebrity voice cast of Neil Patrick Harris, Felicia Day and Rob Zombie.  The game is out this fall - if you missed our E3 preview, you should check it out.

In other Rock of the Dead news, the team have begun to release some free iPhone and iPad apps.  The first is called Zombie Pong and is an iPad exclusive.  You can snag that on iTunes right now.  Other apps planned are Whack a Zombie and music game called Rock of the Dead: Zombie Survival.

Update:  We were just told the Nintendo Wii version is "on the backburner"  - so don't expect it out this fall.