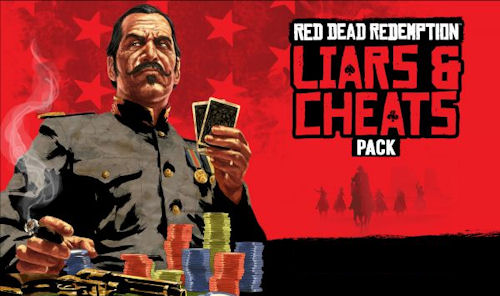 Rockstar Games have released details of the next piece of DLC for Red Dead Redemption.  The new pack, titled Liars and Cheats, focuses on the game's free roam mode and adds in something we asked for during our review - the ability to play the mini games with friends.  In addition there will be seven new gang hideouts to clear with your posse as well as new weapons and multiplayer horse races.

on Xbox Live and PlayStation Network.

Multiplayer Poker and Liars' Dice Games
One of the most fan-requested features comes to multiplayer.

Multiplayer Horse Races
Ride out against your friends and foes online - with mounted combat guns blazing.

The Explosive Rifle
An devastatingly destructive new weapon with its own new single-player and multiplayer challenges.

7 New Gang Hideouts
Posse up and take on the new Hideouts together to level up quickly.

Compare stats with other posses and compete to see who are the kings of the Free Roam frontier.