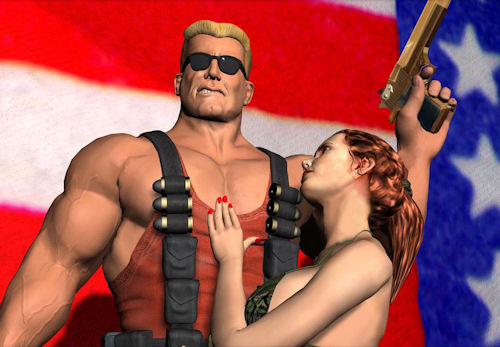 Not only has Gearbox taken up the reigns of development on Duke Nukem Forever, tasked with finishing a twelve year old title, they've actually gone out and purchased rights to the franchise.  That's right - all future Duke Nukem titles will be under a Gearbox banner.  This is coming from multiple sources at the Penny Arcade Expo who attended the Gearbox panel - an panel in which 165 pizzas were ordered to logo stuffed with pepperoni to look like Duke's radioactive logo.

It's unclear if that means the upcoming Duke Nukem Critical Mass, a portable game being published by Activision, will see any delay or changes because of the purchase by Gearbox.  A press release for the announcement states - "The first product to be available under the Duke Nukem brand will be the long awaited Duke Nukem Forever. "  Critical Mass was supposed to hit this fall.  If anything we can hope to see some cameos now across franchises that Gearbox works on - much like we're seeing with id and Bethesda.