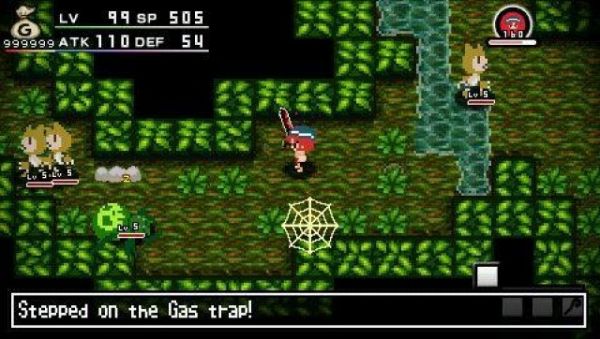 ClaDun: This is an RPG! is a not-so-subtle 8-bit style RPG (duh) built exclusively for your PSP. The name ClaDun is a bit of a play on words, but also describes what the game is. Cla(ssic)Dun(geon) suggests the game is built similar to a dungeon crawler of old, mixed with the humor expected from newer games, and nicely tied together by quirky 8-bit animations.

ClaDun features quite a lot of customizability as you build your characters as from-scratch as you feel. Sure, there are pre-builds of a bunch of 8-bit characters, but if you take the time you can make yourself your own 8-bit character, and so can 3 of your friends. The four-player co-op brings these characters together to battle through approximately 99 dungeons (that you can leave whenever you wish) up until a final boss.

Being able to customize your final boss is something we’ve not really seen with a game before, but sure enough ClaDun has that for you as well. Say you have this evil boss, ridiculous teacher, or otherwise rival human being you’d like to beat the RPG pixels out of, you can model the final boss to resemble that person. Think RPG maker only less complicated.

If you want an idea of what the game looks like from your own two eyes, we have this handy quirky little trailer up for the viewing. You can also get a taste of the game on their official interactive website. The co-op for ClaDun will be able to utilize the AdHoc wi-fi feature of your PS3, or be otherwise playable in great PSP parties.

ClaDun: This is an RPG! will be available for PSP via download only (don’t look at your local GameStop for this one boys and girls) on September 21st.