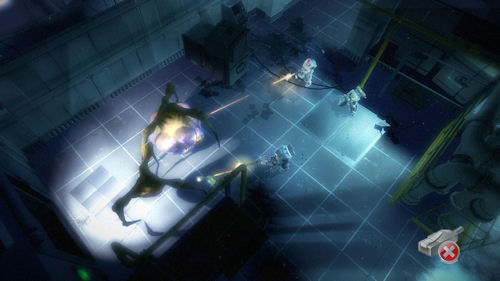 After agreeing that what Nick meant to say in our e-mail exchanges was Alien Swarm, not Alien Breed, we met up on the Interwebs for the first time in a while to enjoy some of the finer points of co-op: killing aliens; lots of them. Preferably as a team, but you take what you can get some times. After making a few attempts as a dynamic duo in the new Onslaught variant to slay the swarms of aliens (and failing), we decided to try our luck with allowing random “Internet folk” to join our rag-tag group. The first fellow to join up was of a somewhat higher level than our characters and had clearly run through the game quite a few times as he was moving through the levels as if his very life depended on it… which, in all fairness, it kind of did. However, his blazing trail approach to moving through the levels didn’t quite match up with Nick and mine’s approach of “something’s moving! Kill it! …sorry, buddy.”

Eventually, this conflict of interests lead to Nick and my untimely demises, and our “Random Internet Person #1” to be somewhat frustrated with being the only person left alive and “carrying the team.” After some intellectual debating (“Keep up!” “Slow down!”), we eventually determined that the best course of action would be for each side to compromise – that wonderful thing that Jim’s experienced on more than one occasion in his Co-Op Couples feature. So we sped up a little, and he slowed down a bit, and things seemed to be going ok… until “Random Internet Folk #2” came along. The one thing Jason missed here is WHY we were dying. You see, by having a random guy blaze a trail through the level plenty of aliens were left in a wake behind him , thereby slowing us down because we were cleaning up his mess. And rest assured, despite us being killed quite often, we cleaned up the mess quite well. Once I made IP#1 aware of the error of his ways, things worked a bit better, though it was still difficult.

The good news is once the second person joined this gave us a full squad so each team member could be an appropriate class. We had the medic (that’s me), the guns (that’s Jason), the tech (Random Dude #1) and the leader (Random Dude #2). Our speedy friend of the past went back to his old habits, wanting to Formula 1 race through the levels. To his credit - he rarely died. To his fault - we still died a lot.

We finally arrived at the epic final mission, ready to unleash our fury on the alien scum that’s been exploding our faces for the past 6 levels. And let me tell you - when your face explodes in Alien Swarm, they explode in a slow motion brutal scene of gore.  We become all to familiar with that screen.

We made our way through the level, planted the nuke, and tried to escape. One by one we all fell, all of us except Mr. Andretti. As we watched him try to beat the countdown clock - we could tell something was wrong.

His speed suddenly stopped. He stood there. Suddenly he warped to another spot taking damage along the way. It was lag, the internet’s unseen killer.

And just like his speedy trek through the levels of Alien Swarm, he made a profanity laced tirade against lag and the internet quicker than a 13 year old with turrets and ADD.  Those foul words will forever be burned into my screen. I did what any sane person would do - offer advice.

“Perhaps you should call your cable provider?”

Alien Swarm replied for him - Random Internet Person #1 has left.