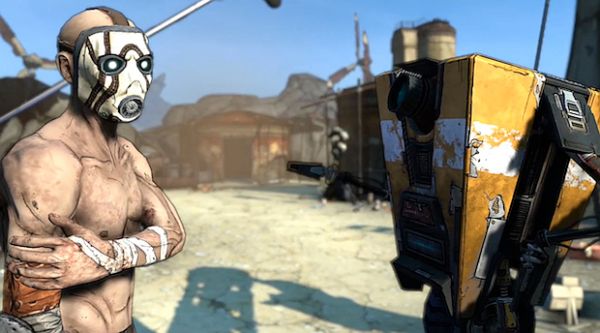 Gearbox Studios has worked up an impressive resume.  The Texas-based company has developed games for such distinguished franchises such as Half-Life, Halo, Brothers in Arms, and Counterstrike.  Last year they saw commercial and critical success with the super co-op friendly Borderlands.  Randy Pitchford, Gearbox's CEO and president, recently spoke with Major Nelson about co-op, Borderlands latest DLC, and effing Duke Nukem Forever.  Here are some of his more quotastic quotes.

"We can't quit you Borderlands." - Randy Pitchford, on the amount of DLC that has come out for Borderlands.

He had several encouraging statements about the state of co-op at Gearbox Studios.

"Being able to have a shared experience with friends is important."- RP

"Co-Op is a huge part of Gearbox's identity."- RP

Pitchford went on to credit this console generation's achievement system with enabling developers a method of tracking co-op gaming experiences.

...difficult in the past to quantify the value of what co-op adds to your game, it was difficult to measure just how many people are buying this to play co-op or not - however its getting easier - the achievement system helps.  When you get achievements that require co-op we can measure how many have earned that relative to the whole.  And we're learning that it's getting more and more important.  We know it's important to us, so that drove a lot of our influence.

The interview wrapped up with some tidbits about the direction Duke Nukem Forever is heading.

"We have to play the Duke Nukem Forever that we were supposed to play" - RP on working with some of the development team that had been working on DNF at 3D Realms.

Finally, Pitchford wraps up the conversation with a final Duke  tease:

When you play those games--when you play Borderlands, and you feel.. the humor in the way we're embracing fun in video games, it kind of makes us even more confident in what's going to happen with Duke.

Only time will tell if Gearbox is the right studio for the accursed Duke Nukem Forever. Does anyone else find it ominous that the abbreviation is DNF, or 'Did Not Finish'?

Hopeful fans can listen to the whole podcast right here.