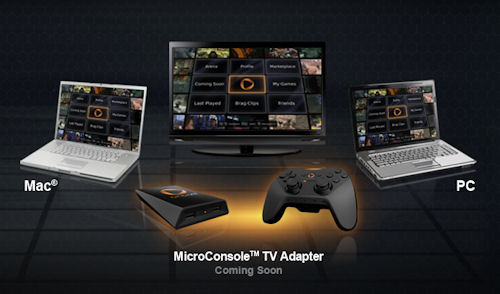 If you don't know what Onlive is, its a service that allows you to play PC games over the Internet with no downloading, installing or configuration on any platform.  Basically the system streams the game to you like a YouTube video.  It's a unique concept that many people doubted would work, but so far, everyone seems generally impressed.

While the service had originally put in place a $5 a month subscription fee - on top of the fees to rent or buy a game - Onlive have announced they are eliminating this cost.  The only fees now are for a 3 Day or 5 Day Rental or to "purchase" the game.  Purchasing the game gives you unlimited play time of the title through Onlive's services.  It also seems like a lot of the titles offer a demo version as well.

Browsing through their catalog there are plenty of co-op titles to be had including Borderlands, Kane and Lynch 2: Dog Days, LEGO Batman, and Madballs: Babo Invasion.  Eliminating the subscription fee lowers the barrier of entry for these games, making it easier for you to convince someone to give the game a try and be your co-op buddy.

Really the Onlive service is for those people who are too shy to get into PC gaming, that don't want to worry about drivers and other setup that goes along with the turf.  Sure you aren't going to get the best or optimal set up - but it seems like you'll get to playing rather quickly.

Onlive currently works on any PC or Mac with a "Microconsole" coming soon from the company that will hook up to your TV to play as well.  Sadly, Onlive is only available in the 48 United State right now as a low latency broadband connection is required to one of Onlive's data centers.  They promise to expand soon - assuming the service does well - and only time will tell.

Have any of you given Onlive a shot yet?