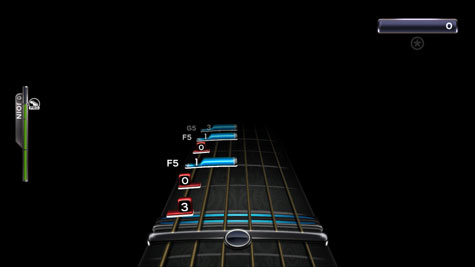 Guitar Hero may have just released a new title, but there's only one game on the minds of discerning music game fans this fall: Rock Band 3.  As the anticipation for the new Rock Band increases, the platform itself has reached a major milestone: as of next week, 2000 songs will be available to play in game, whether via game disc, export, or DLC.  The 2000th song, "Are You Experienced?" is from a real guitar hero: Jimi Hendrix.  I can't think of a better track to have such an honor.  You can download this track and the rest of the Are You Experienced? album on October 12.

Speaking of guitar virtuosos, we've got some details about one of Rock Band 3's most anticipated features, Pro Mode guitar (and bass).  All you ever wanted to know about using Rock Band to train yourself to play a real guitar can be found on the official site.  There will be different challenge levels in Pro Mode, from Easy to Expert.  The note track looks very different, but still familiar, as you can see from the screen above.  A "Position Wave" allows you to see what your left hand is doing on screen while keeping your eye on the note stream.  You'll even learn the names of chords, folks.  It may seems difficult, but according to Harmonix, people have gone from guitar newbie to playing power chords on Medium Pro difficulty within an hour.  All this, and keyboards, too!  Is it October 26th yet?