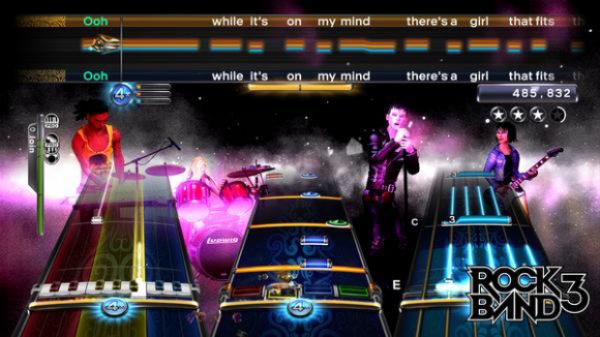 With Rock Band's catalog of music hitting over 2000 songs this week, and soon to be a lot more added with the impending release of Rock Band 3 later this month, it's become difficult to remember just what's available in the game.  Perhaps you need to see if your favorite song has been added to the catalog but don't have access to the game, or you'd like an easy way to search for the song.  Luckily Harmonix has released just such a tool and we've got it embedded for you below.

With Rock Band 3's release several folks want to know how the back catalog of these songs will work with their new game.  Like before users will need to purchase a one time key to import their Rock Band 2 songs off the disc - all existing DLC should work right out of the box.    This includes Green Day, AC/DC and the like - if you exported those into Rock Band 2 you'll already have them in your Rock Band 3 collection.

But what about the Pro mode content?  Will we see these songs from the past get upgraded?

IGN: What are you guys planning as far as updating the back catalog of DLC with pro mode and keyboard support?

DeGooyer: I don't think we're announcing anything specific yet, but we're gonna have one major band that we're working with that has already got some DLC out there, and we're going to add to that DLC, and retrofit their DLC with pro mode. Then there's a selection of other tracks in the catalog that we've gone back and identified, and we have suggestions as well from our community, and we've gone and identified those tracks. So our first announcement will actually be a pretty good cross-section. And I think that track list will help people understand the stuff that we would actually go back and retroactively put pro mode into.

While pricing for the Keyboard and Drum pro content will be identical for DLC, the Guitar Pro mode DLC is actually going to be a $1 extra on top of the existing $1.99.  The reason behind this is mapping the guitar tracks is a lot of extra work.  It should also be noted that not all songs will have a pro guitar mode as the track doesn't really make sense for the music it plays.

More details on the pricing and DLC is available at this IGN interview.