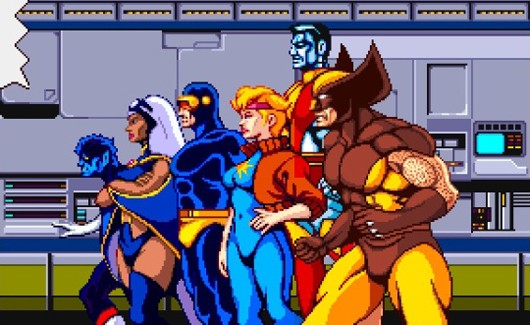 Once made popular on the arcade style cabinet, X-men Arcade is bringing the good old co-op fight (from 1992) home. For the first time ever (18 years after the games innitial release), X-men Arcade will be playable on home consoles. Comic Con this year gave us a quick Sneak peek at the side-scrolling brawler, and now we have some more details to add to that.

As mentioned the game will be playable on the PSN and XBLA systems via download. We love that we get to add to that: 1-4 players local co-op, 1-6 players online co-op. Drop-in will be available, so don’t worry too much about being a bit late to the party. The game will also feature the original storyline out to save Kitty Pryde and Professor X from Magneto and crew.

In X-Men Arcade, Cyclops, Colossus, Dazzler, Nightcrawler, Storm and Wolverine unite to use their special powers to save mankind from the Brotherhood of Evil Mutants and other terrible threats. Players will have to fight off hundreds of Sentinels, along with Super Villains such as Pyro, the Blob, Wendigo, Nimrod, the White Queen, Juggernaut and Mystique, as they battle their way to Island M to take down the Master of Magnetism, Magneto, and save Kitty Pryde and Professor Xavier.

There are boasted High-def displays and leaderboard menus for the game, and hopefully we’ll see a bit of a visual overhaul (but not too much) to X-men Arcade, making it fit for the current generation of arcade. Developer Backbone Entertainment is responsible for bringing about this classic, and with their success in various downloadable and co-op titles the game seems to be in good hands.