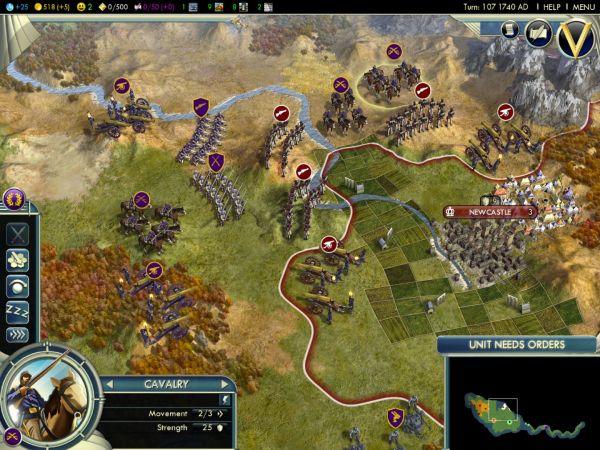 Civilization V has received its first major update today of what's likely to be the start of many bug fixes, tweaks, and enhancements to the game.  The series has always be tinkered with over its life and been supported quite well by the developers based on community feedback, and it looks like Civ 5 is going to follow that tradition.

Also out next week will be the first batch of DLC for the game - both of which were included with the deluxe edition.  The Mongols Civilization and Scenario Pack and the Babylonian Civilization will be available for download.  The Mongols pack will be free while the Babylonian civ will cost $4.99.  I've used the latter in my campaign already and can say they are excellent if you are going for a science victory.  This also makes them an excellent civ to use in co-op since all players get the science bonuses.

Patch notes are listed below.

UI
* Fix for production prompt that sometimes appears with newly created puppet states that could stop the player from being able to end the turn.
* Aircraft banner corrections - now when you rebase an aircraft, the number will move with it.
* Resource icons now come up with Ctrl-R again, instead of sharing the same button with Build Roads.
* Selecting a great general will no longer cause yield icons to appear.
* Added option to disable auto-unit cycling.
* Fix for full-screen game when running dual monitors. Previously, the curser could scroll off the "open" side, and not be able to scroll the map in that direction.
* Misc additional fixes to mouse controls, and other interface issues.
* Rounded out financial information in the Economic Overview screen.
Details now provided on the amount of gold provided by each city, the cost of buildings in each city, etc.
* Auto-populate save menu with save file name
* Allow selection of other cities by hex from within the city screen
* Added detailed trade route info to Economic Overview screen
* Added new tab to the Economic Overview Screen: "Resources & Happiness."
* Added option to activate the mp score list in single player (for "always up" score similar to Civ IV.)
* The Annex/Puppet/Raze popup now indicates how much extra Unhappiness will be assumed with each action.
* If there are less than 5 buildings still needed to construct a National Wonder, the production popup tool-tip now lists which cities lack them.
* Added Yield & Culture tool-tip info to the production popup.
* Tweak information on the Global Politics tab in the Diplomacy Overview screen.
MODDING
* Category list now displays correctly
* "Installed" panel now displays ALL versions of a mod but prevents the user from enabling multiple versions.
GAMEPLAY
* Workers - Added option to force workers to ignore manually made improvements (so they don't change what you decide was best for a plot).
* Workers - Fixed bug where number of turns to complete were incorrect in build action button tool-tip.
* Economy - Fixed bug where players could disband a single unit, and not see the economic return until disbanding 1 more.
* Economy - Increased city wealth setting to 25%
* Economy - Multiple fixes to the way trade-routes are tabulated and recognized.
* Economy - Can now sell Buildings in a city (to help lower maintenance for obsolete buildings later in the game).
* Trade - Found and corrected a Trade problem that could cause your Resource inventory to multiply.
* City States - Fixed a bug where you could not gift aircraft to city states.
* Military - Medic promotion now only provides healing bonus for adjacent units.
* Military - Fix for Minuteman movement.
* Military - Correct promotions for "archer-like" units (horse archers, chariots).
* Military - Embarked units will no longer slow enemy land units
* Military - Improved unit cycling logic. Camera will jump around much less.
* Balance - Engineers +1 hammer
* Balance - Disbanding units now provides only 10% of their production cost in gold.
* Request - Enable "one more turn" button if you lose, but are still alive.
AI
* Military - Better handling of unit need (navy vs land, etc.).
* Military - AI will tend to build ships to deal with blockaded cities more often
* Military - Corrected an issue hampering movement of AI armies, especially when in close proximity to enemy forces
* Diplomacy - AI will be more reluctant to offer or accept open border agreements with more powerful opponents.
* Diplomacy - Fix for never ending deals (peace, research agreements, etc).
* City - City specialization and city focus improvements.
* City - Cities that are Avoiding Growth will not grow while that option is selected
* Workers - Priority of trading posts reduced, and rebalanced priorities on other improvements
* Workers - Improved the path-finding mechanic when building route-to roads improved, including a large performance increase when evaluating road-pathing.
* City - Make sure Puppets don't construct buildings that require Resources.
* City - Add a Puppet city strategy that turns off training buildings and emphasizes gold.
* Military - Defensive tactical AI update. When you are at war and threatening an enemy city, the AI will better utilize the garrison, as well as the surrounding terrain in defense of the target city.
MULTIPLAYER
* Exploit - Fix for gifting unit exploit
* Chat - Color-coding, sound alerts, etc., added for in-game chat system, including a larger window.
* Deals - Additional deal validation put in place to verify deals before they are committed
MISC
* Research treaties that end because you declare war will no longer grant the free tech
* Save/Load - Fix for corrupted saves being experienced by some players in late-game.
* Map - Huge map crash-during-load fix that were reported on some specific systems.
* Map - Terrain caching fix that could cause problems for certain video cards (the "glowing red orbs" seen on the map are an indicator of this).
* Map - Fix for the low res terrain that appears the first time the game is run (terrain tiles would not load in anything but low-res the first time you play on some computer configurations)
* Strategic View - Crash fix for units rendering in background.
* Strategic View - Fix for selecting units either standing on a city plot, or garrisoned in the city plot.
* Eyefinity - Better handling of leader scenes when using Eyefinity displays.
* Tutorials - Many tutorial tweaks and adjustments.
* Multiple crash fixes.
* Taller than wide map crash fix.