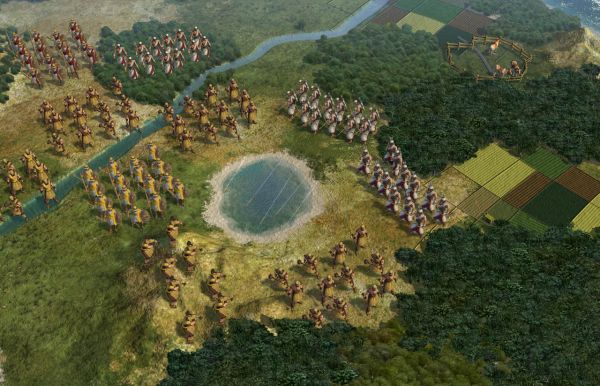 Some of my fondest memories in gaming harken back to sleepless nights with my best friend growing up, playing hot seat co-op Civilization 2.  Overnight we'd transform our empire into a vast and conquering civilization in 30 minute shifts.  This may be the closest the Civlization franchise ever gets to co-op, but I'm still incredibly excited about Civilization V.

Veterans of the series are in for some significant changes to some long standing gameplay mechanics.  Will these changes to the game hold up and keep that one more turn feeling still prevalent?

Firaxis has built Civilization V from the ground up on a brand new engine, one that makes terrain look and feel more natural with several different tile sets that emulate their respective continents.  We were shown the "European" tile set which showed off lush forests, mountains,  rivers and other types you'd expect to find in those nations of Europa.  We heard that African and Asian inspired tile sets exist as well, but every continent will be represented in the end.

Speaking of tiles, gone are the squares for each tile - replaced with hexagons for more movement and strategic options.  This is the first big fundamental change to the series, and it's one that opens up more options not only to the developers but to the players.  Terrain now lines up more naturally with the tiles, creating water, land and other realistic geographical features.  Because of this units no longer have that odd case where they sit on half a piece of terrain.  Goodbye boats on a desert.

But the hexagons aren't the only big change to unit movement, for the first time in the series units can't occupy the same tile - no more stack of doom when attacking opposing cities.  This is potentially the biggest and most controversial change to the series.  Instead Firaxis is focusing on terrain and tactical bonuses for all units.  Hills, mountains, and other terrains will once again apply bonuses to your attack and defense, but the surrounding units will also apply a bonus to your units.  I was curious how the developers would address issues where you'd get support from units for defense - for instance your archers would soften up an incoming enemy attack before your warriors attack.  I was assured this would remain, though it would behave slightly differently than stacking all your units in one location - so you're limited to the number of support units you can have. The final big change involves your empires expansion, and how it occurs.  While influence and city size still plays a major role, players can now have direct control over specific tiles by purchasing them for their city.  In addition City States have been added to the game which are single city nations that provide bonuses to your civilization when teaming up.  According to Firaxis these city states act a bit like a wild card as their relationship with other city states and other leaders can change the dynamics of a game quite rapidly.

Other changes to the game include fully animated leaders that speak in their native tongue, something we've seen before, but not to the depth on display in Civ 5.  Each leader will have their own unique play style, at least in terms of how the AI behaves, as well as special units and abilities.  The producer that gave the demo assured as that the AI will adapt to their opponents, so if you build up a quick counter to Elizabeth's naval armada, she may change up her tactics a bit.  They really want it to feel like you are playing a friend.

Overall Civilization V is looking to be the biggest and most ambitious Civ to date.  Not only that, it's absolutely gorgeous.  It remains to be seen how the changes will affect the game both in short and long term.  Civilization 5 will also include robust modding tools right out of the box, as well as a way to share those tools from within the game.  It's time to start preparing for more sleepless nights.