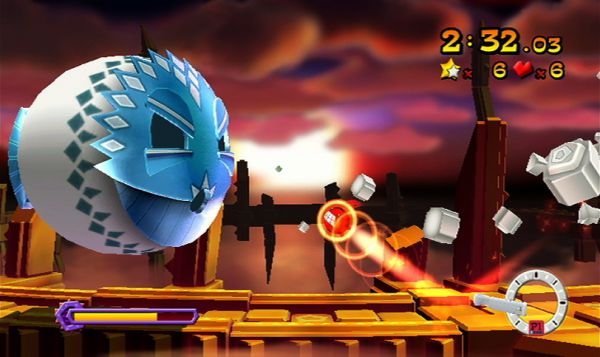 It was only a matter of time, we suppose.  Last year's Wii Sports Resort came with the Motion Plus accessory, making the Wii waggle even more accurate.  Now, we have a new version of Nintendo's controller, putting the two together, and it's rather appropriately named the Wii Remote Plus.  As with perennial sales powerhouse Wii Play, a controller/game bundle is going to be available, and that game is called FlingSmash.  It's a right-to-left side scroller, where a little round fellow named Zip is controlled by aiming the Wii Remote Plus.  As you can see in the above screenshot, the Wiimote representation in the lower corner updates in real time.  To make Zip move, you just fling the controller when the Wiimote is pointed the right direction.

You'll be able to grab another Wii Remote Plus, or a plain ol' Wiimote with the Motion Plus dongle, and add in a second player.  Named Pip, the second round fellow can join Zip through FlingSmash's eight levels.  The game will be available early next month.  Nintendo sure has been on a side scroller kick this fall, haven't they?