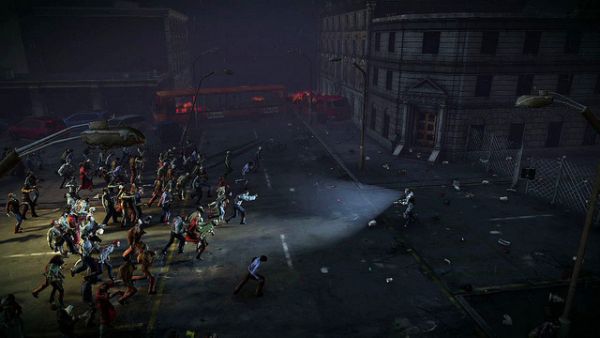 Joystiq has taken an in-depth look at the newest zombie game, Dead Nation - but they want to make sure we don't confuse it for just another zombie title. Since there are so many co-op zombie titles on the market now (Dead Rising 2, Left 4 Dead, Burn Zombie Burn, Zombie Apocalypse, etc), Dead Nation had to make sure they did things a little different to make sure they stood out. According to the preview we've checked out, it sounds like Housemarque has mixed all of the elements we love in zombie games and made a truly amazing downloadable title.

This Dead Nation preview first states that the audio is certainly worth noting, especially for a downloadable title. Wonderfully detailed sounds that certainly draw the player into the game are said to be worth playing in surround sound.

It's not just how good the sounds are, but how many of them there are: every empty can, piece of paper, leaf and corpse you walk over produces a sound. Coupled with an exhilarating soundtrack that picks up right when it needs to, the sounds effects are completely immersive.

Sucking players into a top-down shooter is a bit of a challenge. Sure we love them, find them addictive and thoroughly enjoyable, but being truly immersed in a horror environment is quite the accomplishment from our standpoint. Co-op doesn't take away from this immersion, as the preview was played in two-player co-op. Stardust HD was the first project by developer Housemarque, and it really used the technology available from the PS3 - Dead Nation is no different. They really push the boundaries of visual achievement here, and that charm is barely captured by the still screencaps.

I never thought that an arcade shooter would be capable of scaring me, but Housemarque's attention to detail creates a truly terrifying experience. Dead Nation pulls this off with lighting. Instead of scaring you with darkness, the scariest moments are when you're almost able to see what you're aiming at. The way light reflects off objects, and diffuses into the air and fog, further sucks you into the game. Brightness, in many ways, is something to be feared.

Finally the gameplay that's worth at least trying out. It sounds like Dead Nation is taking the standard aim-and-shoot style and making it a bit more in depth, including some great customizing options.

it's the gameplay that ultimately makes the experience so worthwhile. Even aiming with the default rifle is fun: holding down the fire button gives you an aimed shot that can go through zombies for multiple headshots. But once you get access to the customization options, that's when the game really opens up.

Scattered through the stages are checkpoints stationed with a weapon shop. Here, you can buy the supremely useful flares. The light attracts the zombies, as they swarm around the glow. For as long as the flare is active, the zombies are sitting ducks, making for an easy mass target to grenade or mow down with your weapon of choice: shotgun, machine gun, flamethrower, and so on.

Addional gameplay tactics include luring zombies through environmental distractions, explosions, etc. Use everything at your disposal, including a co-op partner, and you might just survive Dead Nation. Classic horror moments will keep players involved in a great gaming experience.