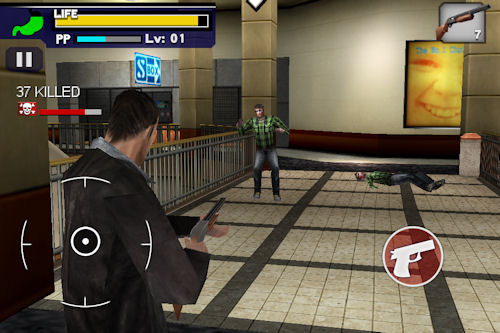 Dead Rising Mobile for the iPhone and iPod Touch is actually based on the first game that takes place in the Williamette Mall starring photographer Frank West.  The events and story of the game aren't identical to the original Xbox 360 title, instead they are unique to the platform.  In the game you'll be killing zombies, finding unique weapons, and of course escorting survivors - though the latter has been revamped quite a bit.

One unique aspect of the game though is the co-op "ability" you have.  While there's no direct peer to peer play for co-op, there is a revival system that utilizes social networking.

The new connectivity option I mentioned before is one of the more interesting social networking options I've seen included in an iPhone game. Once you die in-game you have the option to place what's called a rescue call. This rescue call will be posted to either Facebook or Twitter (or both) and will appear on your friends' news feeds. From there they'll have to click on the link at which point they'll receive a password to input into the Dead Rising app. Doing so enables you to avoid the PP loss that others will sustain if they simply respawn without waiting for a rescue call to be answered. If no one picks up in a certain amount of time, you'll turn into a zombie that your friends will be able to spot and kill in their game (no, you won't have control over your zombie, you'll just respawn as normal).

Touch arcade actually went hands on with the game and game away really impressed.  They said graphically it stands out and looks gorgeous and it controls really well.  They even recorded a video of the gameplay.