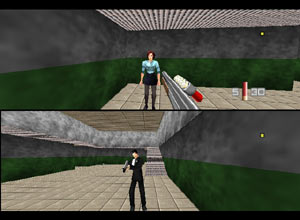 Remember when co-op meant split screen, by default?  Way back in the stone age, when folks were sending smoke signals to communicate, playing co-op meant playing in split screen.  Classics like Goldeneye 64 (pictured above) used this method to great effect.  We love online co-op just as much as the next guy (actually, we probably love it a whole lot more), but it's worrisome that many games are abandoning split screen local co-op in favor of online only.  This interesting post over at Kwanzoo laments the loss of split screen for many of today's best co-op games.  But what current game really gets it right?

It's hard to argue with that point.  That's really the best of both worlds, local co-op, plus online co-op, all at the same time.  If only titles like Too Human and Mercs 2 had split screen!  Imagine the fun of killing stuff at astronomical rates with a buddy right next to you on the couch.  Is it possible that split-screen local co-op isn't featured to get folks to buy more copies of the game so they can play with their friends?  Who knows, but let's hope this trend doesn't continue.