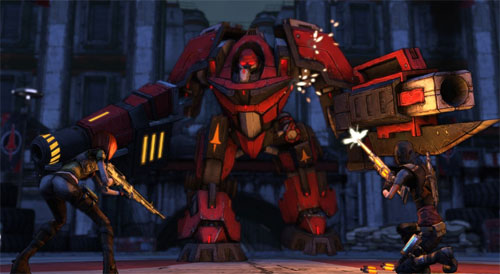 Good news everyone!  As you have probably noticed, we're big fans of the 4 player co-op game, Borderlands.  The role-playing-shooter from Gearbox Studios has had its share of DLC love in the past year, including September's Claptrap's New Robot Revolution.  As much fun as the new downloadable content is, observant gamers who had hit the level cap noticed that something was amiss.  Mainly that their levels were still firmly capped.

Gearbox is remedying this today with a free cap-increasing patch.  We've posted details on this patch before, but here they are again for your viewing convenience:

This Title Update affects all players and is a free update that will automatically download the next time you launch Borderlands on the Xbox 360, PS3, or Steam.

Level cap increase of 8 levels for all players.
- Original Borderlands players will now be able to achieve level 58.
- Owners of The Secret Armory of General Knoxx can increase to a maximum level of 69.

Enemies now scale to new level caps throughout the whole game as long as play through 2 has been completed.

Item drops (with the exception of COM Decks) will now scale to new enemy level caps.
DLC4 Achievement/Trophy glitches that have affected some users will now properly award players for obtaining these achievements.

Players who have also completed play through 2 will now be able to challenge themselves in every place in Pandora!  Every enemy and boss will scale to the players level, giving players the chance to enjoy past zones all over again.

As of this writing the PC version is live and the console versions are due up later today.  We'll keep you updated.