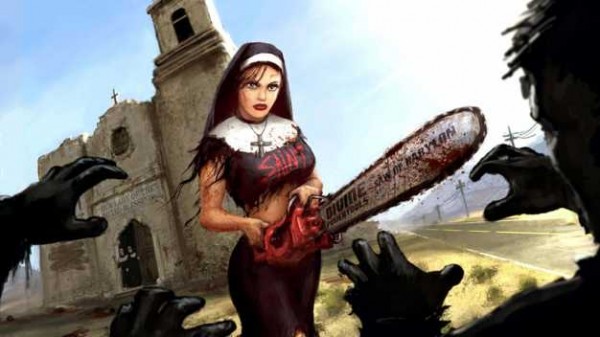 You can tell she's a good girl because it says 'Saint' right on her chest.

The rumor mill that is the Internet is always grinding.  Today I separate some grain from the chaff in the form of some credible news about two co-op franchises, TimeSplitters and Resident Evil.  Read on to see what I have winnowed away.  (I Google 'grist', and this is what happens.  No more mill references, I promise.)

If the above picture doesn't do it for you, then I don't know my audience.  This was concept art released for TimeSplitters 4 in 2008.  You may remember the TimeSplitters franchise from such films as Shaun of the Dead, and...well, that's about it.  Featuring a co-op campaign, a wild story, and a slew of outlandish characters, the TimeSplitters franchise was developed by Free Radical Design.  Like a lot of medium-sized, competent developers, they got bought up by a larger dev (in this case, Crytek) and had their own IPs put on hold.  Now known as Crytek UK, there are rumblings that TimeSplitters 4 may actually get to see the light of day.

We're talking to publishers at the moment about whether that's [TimeSplitters] a viable route or not.

There hasn't been a TimeSplitters game for quite a while. Obviously TimeSplitters is a FPS with a strong multiplayer element. The question is, is that the way to go with another one, or should it go down a different route, or should we be developing a new IP altogether.

It's down to us talking to publishers about what their interest is and where they see it going. If they're keen for a TS game, then we'd be happy to do one. If they'd like us to develop something new then we'd do that.

Hilton goes on to discuss the merits of the TimeSplitters franchise, the game's sense of humor, and even the Britishness of it:

The thing to watch out with something like TimeSplitters is it was a bit of a game of its time, but it was quite British. It had a sense of humour to it. These days it's difficult because the cost of developing the big budget games is so much now you need to have a broad market. You need to be trying to sell everywhere.

After pondering if the game may be too niche, he leaves us with these words of encouragement:

But yeah, we'd love to do it. We don't want to get self-indulgent with it. We want to produce something that speaks to a lot of people and a lot of people play. That's the best thing: when you make a game and it sells a lot of units, not from a financial view, but because it's great to see your product out there that people are enjoying it and playing it

It's interesting that Hilton stresses sales at the end, since it has been speculated that the poor sales of the PlayStation 3 exclusive Haze, which Free Radical developed, put the studio into financial administration.  'Financial Administration' seems to be a nicer (British-ier) way of saying 'screwed financially.'  This allowed them to be purchased by Crytek in 2009, who then tasked them with working on multiplayer for the machine melting Crysis 2, so yeah, they're awesome. I didn't know Sheva was left-handed.

In Capcom news, or more accurately, Capcom sub-contracting news, Kotaku.com recently received a document indicating SOCOM: U.S. Navy SEALs Confrontation developer Slant Six may be working on a new squad based Resident Evil game.  The article mentions the name 'Resident Evil: Raccoon City', and goes on to include Slant Six's increasing work force and the solicitation of a Japanese translator.  All of this is speculation unconfirmed by Capcom, which had this to say:

Capcom does not respond to rumors and/or speculation.

Not the most enlightening response.  If there is any truth to the rumors then expect even more action and less 'survival horror' in the franchise that established 'survival horror' as a genre.  The good news is that team-based shooters almost always involve co-op.  Capcom has definitely been heeding the co-op call with their latest titles: Resident Evil 5, Lost Planet 2, and Dead Rising 2.  Hopefully, they will keep their nose to the grindstone and deliver some more quality co-op titles.