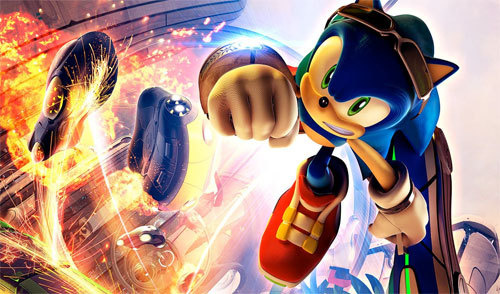 Microsoft's Kinect launches tomorrow and sadly there's very few co-op titles to play.  But if you are looking to flail around your living room to a classic Sega franchise with a friend on a virtual hoverboard - look no further than Sonic Free Riders.    As Tally previewed in our coverage of the game, there's two modes of co-op play.  In one mode called Tag Racing players can join hands and fuse their boards to get extra speed while racing.  In another mode called Relay, players race in a typical relay like fashion to win the race.

IGN is first out of the gate with a review of the title.  The review has revealed the game not only has hoverboards to control, but bikes as well.  But what about the co-op mode?

All these strategies come into play in the multiplayer mode. Whether it's local split screen or online, players need to know these tracks and have a strategy in mind if they want to win. The co-op modes are even more dependent on players knowing the game well. Tag mode, which links two player's board together, is an interesting synchronized exercise. If both players are actually in sync they can pull off come cool moves and the mode is really satisfying. If they aren't, then it feels like a bumbling mess, with the characters bumping into each other and getting their butts kicked.

Having played this last night, I'm still under embargo on my impressions until tomorrow - but I will say that game works surprisingly well while holding a small child.  And in a strange way I think it made the game more fun.

Here's a video showcasing the game's multiplayer modes, including co-op.

Are you planning on picking up a Kinect and Sonic Free Riders?