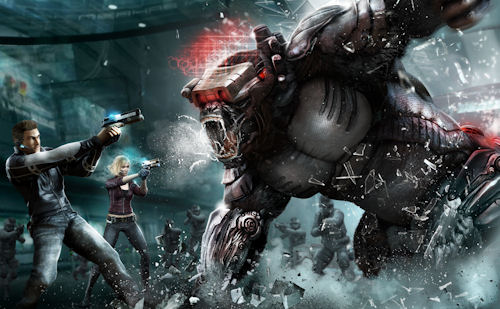 A game that has slipped by our collective co-op radar is one from publisher Square-Enix called Mindjack.  The 3rd person action game's premise has players using the ability to jump between NPC characters by controlling their mind.  A neat gimmick - but there's a catch.  Up to six players can control characters in the game at any time - three for the red side and three for the blue side.  These players will drop-in and drop-out seamlessly via Xbox Live or PlayStation Network for a three player co-op experience.

Here's a bit of the story:

Set in 2031, MINDJACK throws players into the life of Jim Corbijn, a field agent with the Federal Intelligence Agency’s elite “Direct Intervention Force.”  As Jim becomes embroiled in a clandestine war between governments and corporations, he employs futuristic technology that allows him to take control of other characters and machines within the game world by “hacking” into them.


While the premise of Mindjack allows for versus style play,  there are some options to tailor the experience to your liking.  For instance you can set it so only your friends can join the game and you can set it so they can only join your side for true co-op play.

We've been told though that opening up the game to random folks really adds some replayability and uniqueness to the experience - especially when they are the opposing force.  As long as you have the ability to turn off the opposing forces voice, I could see this being incredibly fun.  The fact that real players will dynamically alter your story based campaign is quite unique.

While only the hosts story is being progressed - as long as they don't die - the action keeps going.  But that doesn't mean there's no incentive to join other games in Mindjack, players will earn experience and other unlockables just for joining up.

Looks like next year is already shaping up to be a big year for co-op gamers and its starting on January 18th with Mindjack!