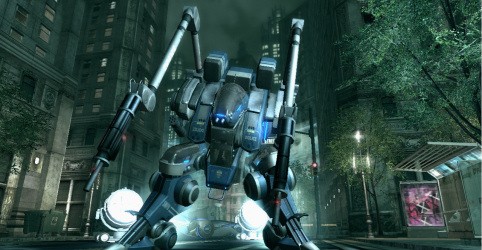 I'll be honest.  I've read about MindJack, and I wasn't really absorbing what the game was trying to do.  Maybe because I kept flashing back to Freejack, the 1992 film starring Emilio Estevez and Mick Jagger.  Which is really weird, because I don't remember anything from that film other than a sweet car crash.

In this game you resemble Agents in The Matrix, without all that noise from the second and third films.  You hop into other people's games and 'jack' NPC's, mechs, or creatures.  You can play as a friend or foe to the host player, who in turn can infect NPC's, etc. to fight on their side as AI.  The video does a fantastic job of explaining exactly what the heck is going on.  Check it out.

Square Enix has also announced a pre-order bonus that can give you an extra edge in your battle against rival MindJackers.  You can get these bonus items by pre-ordering from Best Buy, Gamestop, Amazon or mindjackgame.com.

Unlimited Dash: Have the ability to quickly navigate through the terrain for an unlimited amount of time

Instant High Voltage:  Be able to dash in “Wanderer Mode”, a state in which you can travel as an  electromagnetic wave to search for your next target to hack