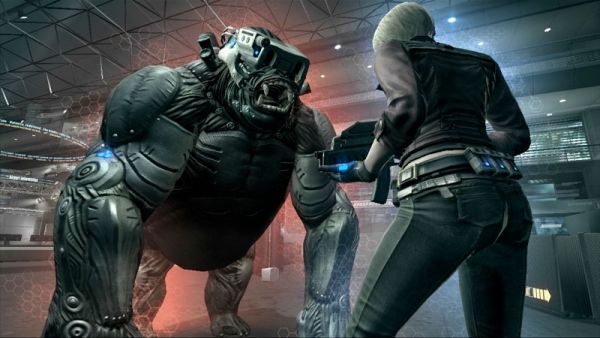 It feels like just yesterday Mindjack arrived to jack our minds, and already the DLC is coming forward to do it again. The first batch of DLC is a triple map pack that was released earlier this week (February 15), while the second DLC map pack is on board for a March 8th release. We know you’re ready to hack into some new maps.

· Airport Shootout: Defend yourself against a raid of Nerkas soldiers coming from every direction at the San Mira Airport.
· Construction Carnage: Take cover behind make-shift barricades to battle against countless waves of enemies.
· Container Maze: Survive through a maze of shipping containers and snipers waiting behind every corner.

· Neon Nightmare: Encounter waves of soldiers and enemies in a fierce battle at an old downtown alley.
· Look Up, Look Down: Defend yourself from enemies attacking you from every direction on a vertical battlefield.
· Truth at Nerkas HQ: Fight your way through a labyrinth of structures inside Nerkas Laboratories. Utilize its hidden corners to gain the most advantageous position against your enemies.

Both versions of the game (PS3 and Xbox 360) will be able to experience these fully mind-hackable, co-opable maps.