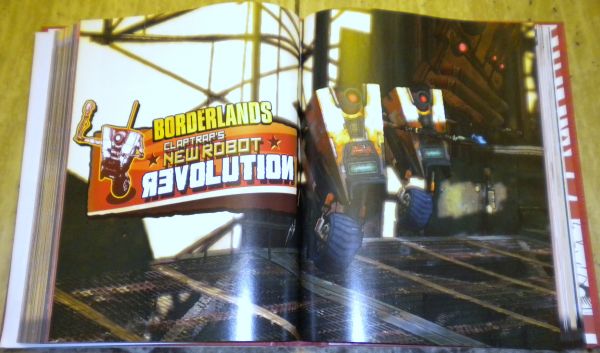 Yes, you read that right.  This is one of those rare occasions, possibly the first and last occasion, that we give you our impressions on a strategy guide.  In this case it is the hardback-bound, 575 page tome that is the Borderlands Game of the Year Edition Guide.

Just how big is it?  Consider these fine works:  Moore's masterful Watchmen, Bryson's brilliant A Short History of Nearly Everything, Danielewski's daring House of Leaves, Hemingway's harrowing Complete Short Stories, Brooks' biblical The Zombie Survival Guide, Martin's monumental A Game of Thrones, and what may be the greatest book ever written, Robert E. Howard's Conan the Usurper (the 1967 publication featuring cover art by the late, great Frank Frazetta);   Borderlands Game of the Year Edition Guide, my friends, is taller than all of these. Behold!  Cower at the massiveness that is the Borderlands GOTY Guide!

I've spent hundreds of dollars on college text books smaller than this, and I never even opened one of them!    Offering up original artwork, added lore, and lots and lots of pictures, the Borderlands GOTY Guide maintains the game's sense of humor and style.  This is more of a collector's piece than a mere strategy guide. It even has a shiny cover.

The Internet has long made strategy guides obsolete.  But this isn't just a guide, its basically Borderlands in book form.  It features an Armory's worth of information on the classes, creatures, weapons, and locations of Pandora. There are full class work-ups... Content is easy to find.  The concept art galleries are nice, but I wish there was little more to them.  The book is already 575 pages long, so I can't complain too much about it.

The Borderlands GOTY Guide not only includes info on the main game, but also covers all four DLCs: The Zombie Island of Dr. Ned, Mad Moxxi's Underdome Riot, The Secret Armory of General Knoxx, and the recently released Claptrap's New Robot Revolution.  It is available now, and a great gift for any fan of the game.  You can also use it to crush your enemies, assuming that your enemies range in size from large bugs to average-sized rodents. Most strategy guides cost around $20, this is a steal at the MSRP of $29.99.

You can find it for even less at Amazon.