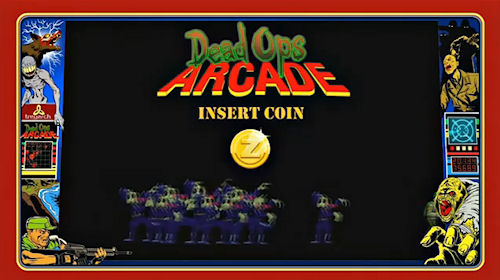 Last month we hinted at a new arcade game mode in the upcoming Call of Duty: Black Ops.  Two listed Achievements/Trophies refer specifically to Dead Ops Arcade.   According to CVG.com, videos are surfacing for a top-down, twin-stick shooter called Dead Ops Arcade hidden in the game.  Activision is pulling videos as fast as they pop up, so instead of embedding a blank screen that says, "This video is no longer available due to a copyright claims by Activision Games, Inc.," I'll just offer you this link instead.  Here you go.  Industrious net users can probably find the videos by other means, as well.

The fact that Activision is pulling the videos lends credence to their legitimacy.  Oh, and by the way, CVG.com also says that this mode supports co-op play, too!  Some of the videos do contain spoilers, including the method for unlocking the game itself, so you've been warned.  Call of Duty: Black Ops is scheduled for a November 9th release.  And maybe, if you're good, we'll leave you a little something after the break.

Oh, what the heck.  Here's a little peek.