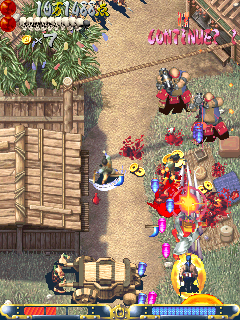 If you are reading this news bit in anticipation of a new cowboys vs. dinosaurs game, well, I'm sorry, you're out of luck.  That would be Gwangi, not Guwange.  The latter, released today on Xbox Live Arcade, is a port of a 1999 shooter.  The game was developed by Cave, a company legendary among shoot-em-up afficianados.  (Deathsmiles, released on XBLA a few years back, is another Cave title.)  Guwange is set in fuedal Japan, and the heroes travel on foot, rather than flying around in a spaceship as is typical of the genre.

There's no HD makeover for this release, but there is a new control scheme that simplifies the action a bit, allowing the twin sticks of the 360 controller to be used together.  Also, a special "Blue" edition, previously hard to come by, is included.  The official Xbox.com page for Guwange promises online co-op, but doesn''t mention local co-op at all.  We'll certainly be checking it out to verify, but I'd be very surprised if local co-op was missing.  Guwange is a premiere level shmup and just goes to show you how lucky fans of the genre are to be living in this era of downloadable content.