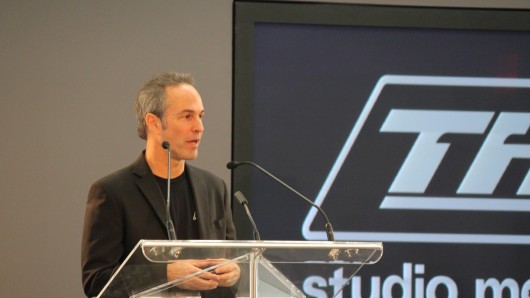 We don't do a lot of coverage of the executive shuffle that takes place in the games industry here around Co-Optimus HQ, but one change that might be worth covering is one that actually took place in 2008 when THQ hired a man named Danny Bilson.   Bilson came from an 8 year stint at EA doing a lot of creative work on various franchises, but when he arrived at THQ he had a vision to transform the company.

The first thing Bilson is doing - or did - is to get rid of the fluff.  His goal was to transform every game that THQ produces into a AAA title.  Along this path he has created new studios with some pretty exclusive talent, including opening a brand new studio in Montreal head by Patrice Désilets who helped create the Assassin's Creed franchise for Ubisoft.  The studio will actually have three teams working on three separate AAA titles.  Bilson is also working with famous film director Guillermo Del Toro on a new title for THQ that is set to be unveiled soon at the VGA Awards.

The other change Bilson has ushered in is the way a company works on sequels.  Instead of waiting to see if a game actually sells well enough to warrant a sequel - they begin work on the sequel as soon as possible.  Because of the way game development works, you'll have people that might work a lot in the beginning of a game - and not so much towards the end.  Instead of having downtime, these resources are being shifted to a sequel creating a cyclical pattern of development.

The reason you have to do sequels is to get the cost down. It literally takes three years to start an original IP and get it to gray. Then the rule is we give them two years for the next one. So that already cuts about a third of the cost for the sequel. Now they already know how to make the game; they've got a certain amount of assets that can be re-used. In Homefront, a lot of the weapons and tanks, for example, will be the same for the sequel, but it will have different characters and environments. Most importantly, you have a team that now has worked together and knows how to make something. Homefront is THQ next big AAA title, coming in the Spring of 2011

So all of this seems well and good, but perhaps the real game changer is the approach to used game sales that THQ is going to take.  While we've seen the likes of EA and other publishers try to combat used game sales by including unique, one time use vouchers in their product that unlock content on the disc, THQ is taking a different approach.

I'm really excited what we're doing with MX vs. ATV. We're going to put out the best MX ever at $40 retail. We're not going to lock the used guy out of any online, they're going to have a full ticket to all the functionality. Within the game there's going to be an online store where we're going sell items to people where they can build at their choice. You can wind up paying more than $60 or less than $60. That model is really exciting to me; a game where you can build and invest as much as you want is great.

I'm really excited about digital model going forward in terms of putting out a sort of buffet of game and letting people shop how they like. Somebody with less money can still play and somebody with a lot of money can be passionate about it. That solves a lot of these problems. You're going to see on that game, the used gamer isn't locked out of anything; he unlocks everything and the store. That's the future, that sort of a buffet game.

So instead of taking away feature, they are simply enticing users to buy more features in a game.  Not only that, they are enticing them to do so by selling their game at a cheaper price point.  This means more sales up front, more potential customers, and possibly, more money.

This sort of model has worked for quite some time in many Asian markets for Free to play MMOs.  It's something we've actually been seeing starting to take off here in the US as well - many MMOs are going free to play with extra income coming from microtransactions in the game itself.  These are big titles too like Champions Online, Dungeons and Dragons Online and others.  What ends up happening is that the 10 or 15%  of the customers end up carrying the rest - something we talked about at PAX East with Perfect World Entertainment.

Whether the end game actually pays off for THQ has yet to be seen, but if anything, Danny Bilson is one to watch in the industry.  He's never afraid to speak his mind, he's professed many times over he's a core gamer at heart, and perhaps we'll have something better for both the consumer and the company because of him.