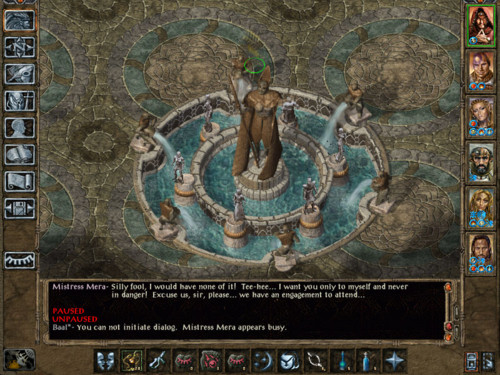 Baldur's Gate 2, which may as well be called "This is Dungeons and Dragons," is now available for your six player online co-op pleasure at Good Old Games.com.  For those of you not familiar with gog.com, they have an amusing 'about us' page that pretty much gives you the nuts and bolts of the operation.  The long and short of it is that gog.com offers out of print PC games as digital downloads when they aren't faking going out of business.  Stupid marketing ploys aside, the site seems solid.

For those of you that don't know, Baldur's Gate 2 kicks all sorts of butt.  It debuted to about as much universal acclaim as you can get if you are an isometric RPG based off of the 2nd edition Advanced Dungeons and Dragons rule set.  Which is more acclaim than you would think. There are 16 pages of 5 star user reviews on the Good Old Games website if you don't believe me.  I'd like to make fun of Dungeons and Dragons right now, but it's so, damn, easy.  But seriously folks, Baldur's Gate 2 is one of the cornerstones of modern gaming.  Do yourself a favor and check it out.

Baldur's Gate 2 is available now for $9.99 and includes the main game, the expansion; Throne of Bhaal, and a ton of bonus digital media.