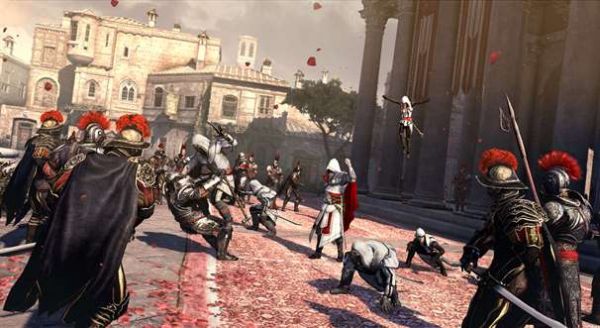 We've talked about Assassin's Creed: Brotherhood in the past on Co-Optimus, not because it contains co-op, but rather to clear up confusion that it DOESN'T contain co-op.  All of the marketing material, videos, and information we had scene suggested cooperative play without actually saying it - after all - a brotherhood isn't so much a fellowship without other fellows.

What some may not realize is Assassin's Creed: Brotherhood was actually built in only a year's time.  Because of this, Ubisoft Montreal had to have a tight focus on its features like strong single player and multiplayer versus.  Sadly, co-op was left on the table.

Eurogamer: Did you explore co-op for the campaign? What are the design challenges there?

Mathieu Gagnon: Co-op for the campaign is quite tricky because we've been a single-player franchise from the beginning.

It's not something we haven't thought about, but for a one-year endeavour of pulling out a game as huge as Brotherhood is, it wasn't on top of the priority list. I wouldn't go as far as to say we didn't look into it, but it quickly became obvious that we'd never have time with the resources we had to actually make this happen in a triple-A manner. That's why it was left on the table.

Will it come for other games? Your guess is as good as mine.

Eurogamer went on to press the issue further, saying that co-op in the series is technically possible, and that in Brotherhood's case it was simply a resource issue.  Gagnon agreed, but didn't elaborate on future plans.