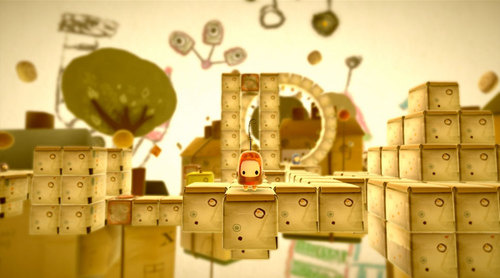 It's very difficult for a game to stand out these days.  Store shelves are packed full of dozens of different titles for multiple systems.  It's even tougher for downloadable titles, especially when you consider the hundreds of other games out there, and the limited options for advertising.  One upcoming game, a puzzler called ilomilo, has taken a unique approach to make itself noticed.  Instead of providing a demo in the Xbox Live Arcade store, potential players must visit the ilimilo secret code site, where they can get a code that, when redeemed, gives you a demo of the game.  It's certainly a novel approach.

As far as the game itself, it's described as a puzzler, with two protagonists, ilo and milo.  The pair begin on opposite sides of the screen, and must work together to meet in the middle.  That sounds very cooperative, doesn't it?  According to the Xbox.com entry for the game, ilomilo supports two player local co-op only.  If you try the demo, and like it, you can go ahead and purchase it now!  Co-op puzzles and adorable graphics make ilomilo a game to keep on the radar this holiday season.