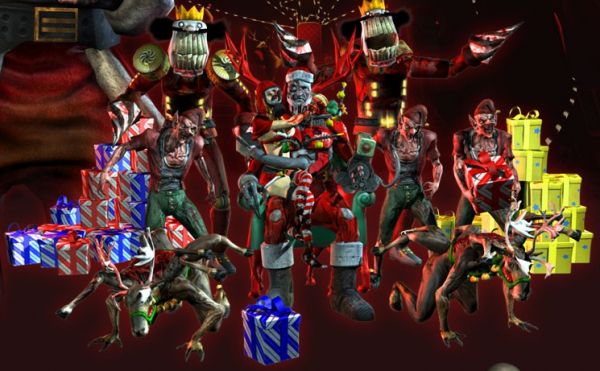 It's that time of year... when you're getting pretty sick of all the holiday cheer.  Why not take out your frustrations on the whole "glad tidings" bit with some good old fashioned zombie killing?  Killing Floor is bringing its players the "Twisted Christmas" event, starting December 14 and running through January 4.  All of the normal zombies and other enemies will be replaced by holiday themed specimens, and there's even a brand new level: Santa's Evil Lair.  (I suppose we all knew deep down inside that those elves were a bit diabolical.)  If that isn't enough for you, there are new achievements, including 13 Christmas themed ones, taking the total up over 130!

A new playable character, Baddest Santa, will be made available.  But the twisted Kris Kringle won't be alone, as the Team Fortress 2 Pyro will be a playable character as well (for those who own both games, anyway).  Tying in with the holiday carnage, a new batch of DLC will launch: London's Finest.  It's got four brand new characters, and I'll give you three guesses as to the new setting for this DLC.  We thought highly of Killing Floor in our review; now might be a good time to check it out if you haven't already!