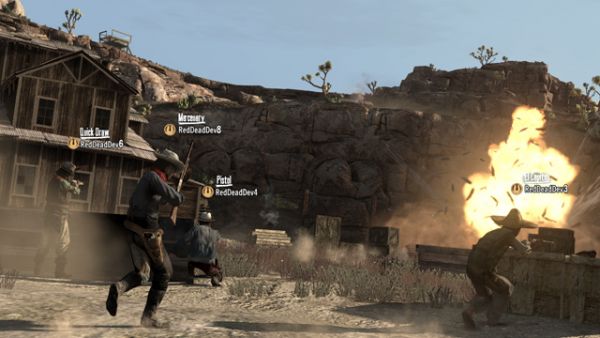 Red Dead Redemption made a killing at the Spike TV Video Game Awards last night, bringing home the prizes for Best Original Score, Best DLC (Undead Nightmare), and Game of the Year. As insignificant as that may be to a lot of gamers, it sends a clear message to the industry: co-op is teh good. Awards won by Halo: Reach, Call of Duty: Black Ops, DJ Hero 2, Rock Band 3, and a special mention of Portal 2 all served the same purpose. Co-op is loud; co-op is proud.

If this event has suddenly renew your interest in playing Red Dead Redemption - as it has mine - then Rockstar has just the pill to get you started: some co-op tips. We've posted them in their entirety below. See you on the trail, pilgrim.

Ammunition (The Mexican Army has the town of Tesoro Azul under siege.  Storm the gates under heavy cannon, Gatling gun and sniper fire to destroy the Mexican artillery placements.)

The Escape (Attack and steal a gold coach along with a wagon and a Gatling gun.  Once acquired, you will be sent to turn them in to the American Army and then must clear out remaining resistance in the town of Tumbleweed.  After clearing the town, prepare for an explosive standoff that will take you all the way to Mexico.)

The Herd (Cattle rustlers have taken control of Box Canyon.  Fight your way in and wipe out the rustlers, then use teamwork to protect the herd as you lead them home to Armadillo while drawing heavy fire from snipers and reinforcements on horseback.)

The Kidnapped Girl (Bandits have taken over Fort Mercer and they're holding a farmer's daughter hostage.  You and your crew will need to charge the fort and eliminate the gang with all firepower necessary - then fend off enemy reinforcements as you transport the girl by stagecoach safely to her home at Ridgewood Farm.)

The River (Ride a raft down river, taking out rebel encampments along the way until you reach the rebel stronghold of Nosalida and a final epic battle for the town's massive weapons caches.  Watch out for Gatling gun-equipped enemy rafts.)

Walton's Gold (Walton's Gang have taken control of a mining camp rich with gold.  Fight through the camp and load your mine cart with as much gold as you can carry, then get out as fast as you can - Walton's boys have rigged the place to blow!)