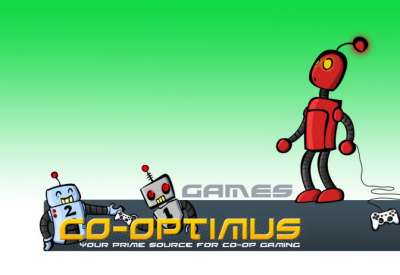 Welcome to the initial post of a column we like to call Beyond Co-Op. This is a column where we talk about other news around the industry that isn’t necessarily tied to co-operative gaming. Each week will see the subjects of the column listed on the front page with more in-depth discussion after the break.  Lets face it, we are all gamers that simply love games, co-op or not.  There's plenty of stuff going on around the industry that we can cover; so why not do it?

We’d also like to open this up for any suggestions on topics you may like us to cover. Please contact us at tips@co-optimus.com and please write in the subject something pertaining to “Beyond Co-Op” since it is our general tip e-mail. Onto the stories:

- Star Wars: The Force Unleashed Comes Out This Week, Motorstorm 2 Gets a Date

This is probably not what Midway wanted, but thanks to the various Achievement sites out there that list them well before a game’s release, we now have the lineup for the upcoming game that sees the MK characters battle against the DC ones. Some of you may not be interested in the game, but for all my friends (including bapenguin) who have gotten the chance to play it, they’ve been pretty blown away so I have hope. Here is the lineup:

The lineup is nice, but early reaction is that quite a few characters were missed on both sides. In my opinion 22 characters is plenty especially when you’re trying to balance 11 new characters to your stable of characters. There is no doubt if this sells well that another game with these licenses will be made.

Some of you may or may not be excited about the “New Xbox Experience” coming this fall, but for those that don’t understand it all, Microsoft’s Gamerscore Blog has begun explaining things that people may not know about this update. This week they get into how the “Games Played” section is being reworked.

It seems the information will flow naturally along the screen. Your GamerTag will be at the top, cascaded behind it will be your overall Gamerscore with some of your most recent achievements in icons there. Cascaded behind that are all the games you have played, each one on a different page and it is sounding like they will be listed via Last Played date, so you won’t have achievements at the front of a game you played a while ago. Here is a picture to better illustrate what they are explaining:

As said above, Gamerscore Blog hopes to continue bringing you this information every Friday.

Most of those who have followed Spore’s development knew about the DRM before the game came out, but a growing amount of people have decided to resort to using Amazon’s review area to unleash their anger about the DRM. There was even a time on Thursday or Friday where Amazon took down the reviews, but they reinstated them not shortly after. Now, I don’t have a problem with people giving reviews of games on Amazon, but giving a game 1 star just because it has the DRM on it is just wrong. For the most part these people didn’t go out and buy the game, so reviewing something they have never played even with the DRM just seems wrong to me. Funny thing is most of these people have either not played it or have probably pirated a copy of the game that has the DRM cracked on it, but that may be a generalization from me.

The somewhat bigger issue is that you can only use one EA Account per physical copy of the game. EA supposedly said early on that anyone could create an account in the family and be able to upload their Spore creatures and do other things the online component allows. Now it seems you can only have one EA Account and everything gets flooded through there. For many this may not be a bad thing, especially in a house with little children, but what about those houses with a husband and wife that both play or one that has older children in it? Each person would probably want their own account tied to their creations. Just bad form the option for multiple accounts isn’t in the final game.

Source: Multiple places, feel free to do a Google Search

Although Rock Band 2 does come out this week for the Xbox 360, it falls under the Co-op type of gaming. The other big game coming out this week is Star Wars: The Force Unleashed, a new single-player experience only game that tells an original story happening between Episode III and IV. I have had the opportunity to play through the whole game and you will see a review by yours truly and Bapenguin over at Evil Avatar come early Monday morning when the online embargo lifts. I point this out only because this review is going to be a bit different from the other 2-way reviews we’ve done in the past (like the most recent Too Human one).

The other big news is that Motorstorm: Pacific Rift now has a firm date of release: October 28th. This of course adds to the big mess of games coming out in late October, including some of our most anticipated Co-op games like LittleBigPlanet and Fable 2. It also adds to the mess with coming out on the same day as the highly anticipated Fallout 3 game from Bethesda. Get ready for your wallet to really moan come the latter part of October!

The first Motorstorm was an excellent game and I personally can’t wait to play this one. Racing games this fall are going to be some hot competition with another “dirty” game, Pure, coming in a couple weeks and the powerhouse Midnight Club and Need for Speed series both coming with new iterations.

Big news from yesterday is that Crytek and Valve have announced that both Crysis and the upcoming Crysis Warhead will be coming out on Steam along with the obvious physical copies of both. This will add another avenue for people to purchase these games and see if their computer can handle these graphical powerhouse games.

The possible story behind the story is whether this is the beginning of EA bringing its catalog of games to Steam or not. Many people are saying that since Valve and Crytek are both in the EA Partners program that we aren’t going to see more EA games coming. I personally think this might just be the beginning or at least I hope it is just the beginning. If this does pan out though, then EA would basically be saying that their download service was a complete failure, which most of us think anyway. If EA entered into Steam I think sales would go up quite dramatically since Steam is so loved by the gamers out there.