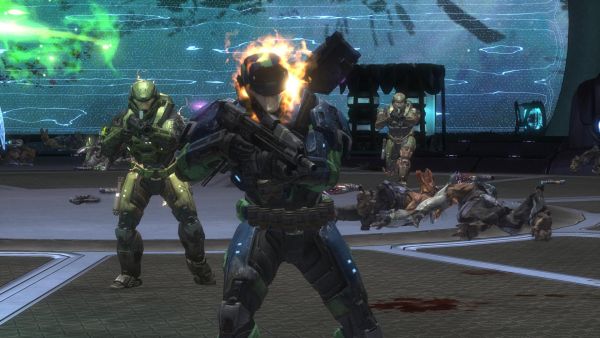 Jim and I made plans to play together last night, and I logged in a few minutes early, comparing our game lists in order to find a good match.  I had been hankering for some Monday Night Combat, but a large patch to be downloaded sank that ship before it even sailed.  So, back to Plan A, which, as you could likely surmise from the title, was Halo Reach.  I started a Firefight match, joined by the magic of Xbox Live to Jim as well as by couch to my 9 year old son, and the Covenant killing began.

Jim was kind enough to chronicle our brief adventures in screenshot form.  You can check out the entire gallery below, but I selected a few that will hopefully be worth elucidating for your viewing and reading pleasure.

First of all, note the picture above.  Jim appopriately named this one "Trio of Death".  There are three of us, you see, and well, just look on the floor of the Covenant ship for a couple examples of mortality.  As is his wont in real life, Jim is hanging back, blending into the environment in carefully selected camoflague hues.  My son, playing as a guest, and not in his normal white and red regalia, is immediately behind me, gun at the ready.  I, of course, am the one in the bright blue and green armor with the flaming ODST helmet.  Blending in is not exactly a virtue of this suit.  I'd say it's the flamboyant outfit that makes the bad guys shoot me more, but that would be untrue; it's because I suck at shooting them before they shoot me. If there's one thing more heartwarming than co-op, it's a father son team taking down a Jackal with simultaneous melee moves.  Looking at this screenshot, I am reminded of Thanksgiving, oddly enough.  It's as if the meal is over, but there's just a little bit of cleaning up to do.  The wishbone is found, and it's a mad tug of war to get the biggest piece.  I'm not sure who got the best part of this poor Jackal, but he's about to get elbows to the temple and the lower lumbar region of the spine simultaneously.  No lucky wishes for this Covie! I suppose Connor has learned the value of teamwork and cooperation with others besides his old man, as this screenshot proves.  The lad was more than willing to share the Gravity Hammer beatdown with Jim.  I picked this shot to explain an interesting quirk: when taking the screenshots, Jim accidentally confused my avatar for Connor's.  It's an honest mistake; I'm sure Jim just assumed that the 9 year old kid would be the player who was dead all the time.  Not so; when it comes to dying, my motto is "early and often".  By repeatedly getting headshotted or stickied into oblivion, I'm easing the pressure on my teammates to not be "that guy".  It's a service I'm glad to provide. This is one of my favorite pictures from the entire set.  There's a lot to like here.  For one thing, it serves to illustrate how gorgeous the graphics in Halo Reach are.  I've been playing some Halo 3 ODST lately, and though the games were released just a year apart, the visual difference between the two is staggering.  Another aspect I like about this is the contrast between playstyles.  Jim is running gracefully, using precise, carefully placed shots from a small but deadly accurate weapon.  On the other hand, I've torn a turret from it's base, toting it around slowly and ponderously, spewing a rain of bullets in order to take a few down with me, for no other reason than brute force.  The surgeon's scalpel vs. a rain of napalm, I suppose you might say.  I'm sure there's a good "he's compensating for something" joke here, too, but it's a family website, after all.

There are many other fantastic screens in the gallery.  The ever popular "grenade in a Wraith" is included, as is a two-for-one Gravity Hammer kill.  Also look for Jim's failed but valiant effort to destroy a Phantom with infinite grenades.  We hope you enjoy the visual chronicle of our evening together.  Thanks, Jim, for the fine time playing Firefight and for taking such fantastic pictures!  Next time, try to get a least one shot with my corpse in it.