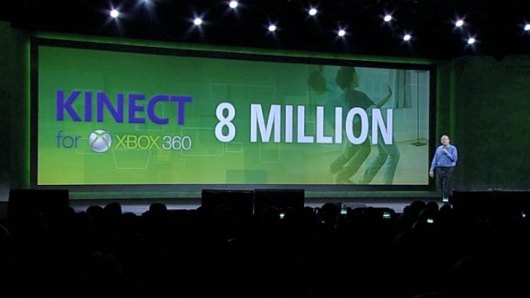 Microsoft officially kicked off the Consumer Electronics Show (CES) last night in Las Vegas with their keynote address.  During the hour long presentation Microsoft CEO, Steve Balmer,  shed some light on just how popular Microsoft's Kinect is.  Originally estimated to sell around 5 Million units during the holiday season, Microsoft unveiled they actually sold 8 million units in the first sixty days of the device's existence.  Quite impressive.

But what does that actually mean for you - the gamer?  It means with an solid installed base already, developers are going to start putting money into development of titles for the peripheral.  So why we may not have been all that impressed with the depth of the launch lineup, we're hoping for some solid co-op games down the road.

There were a few other gaming related announcements during the presentation, notably a Fable 3 mini-game was making its way to Windows Phone 7 devices.  The game is called Fable 3 Coin Golf and whatever money you earn in it will be transferred over to your console version of the game. Finally Microsoft announced a "game" called Avatar Kinect.  In actuality, its an avatar based chat room or meeting tool.  Using the Kinect the game maps 1:1 motion of not only your whole body, but facial animations as well.  The result is a pretty realistic, albeit goofy, implementation of a bunch of people sitting around chatting.

There's other uses for it as well, launching with 15 "sets" players can create mock news casts and other types of situations which are then able to be uploaded to Facebook to share with friends.  Could we see the next version of podcasting take shape here?  The good news is its free for Xbox Live Gold members - of course - you'll need a Kinect to make it work.  No release date was given.

Finally Netflix is getting Kinect support for its interface and Xbox Live is getting Hulu Plus support for streaming shows and movies available on that service.  Hulu Plus will also allow folks to use Kinect for controlling the interface.  There's no word if the co-op friendly movie watching feature of Netflix will carry over to Hulu Plus.

That's about it from Microsoft's keynote - nothing major on the co-op front, but mostly relative anyway.