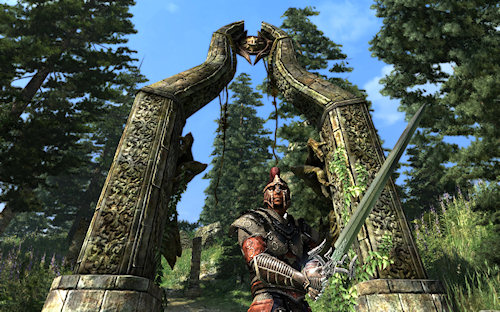 Two Worlds 2 is out next week in North America and with it comes an 8 player online co-op campaign for you and your magic casting friends to enjoy.  We've been following the game for quite some time and it's gone through an epic journey, almost as great as the one Sordahon has gone through.   We had thought that journey came to an epic, 80's inspired ballad, conclusion - but we were wrong.  Oh so very wrong.  Today we have the latest episode for your viewing pleasure - as Sordahon journeys to the depth of hell, otherwise known as - Southpeak Games Customer Support.

Ok, so the fun video is done, lets get serious and talk developer diary.  The first one has hit the net and it focuses on a few aspects of Two Worlds 2.  First up, we get a bit of the reasoning behind...to put it nicely - a lack of quality in the original game.  But TopWare and RealityPump want to prove that Two Worlds 2 is full of polish and the messiness is behind them.  To do this, the video goes on to show just how beautiful the game world is thanks to their new proprietary engine that works on all three platforms.

After that, its onto how players can customize not only weapons and armor with a crafting system, but utilize and in depth alchemy and magic system all of which are completely unique and customizable.  The video states over a million combinations of spells are possible - but there's only one we want to know how to create - the infamous Shitstorm Spell.  Yes, this is a real thing.

Finally we've got some news on pre-order bonuses, all of which are exclusive to Gamestop.  First up is a massive hulking sword to lop the heads of your enemies off with (I don't know if you can actually do that, but it'd be nice).  It's called Luciendar and its apparently massive...and hulking...and a sword.  Next up is an exclusive dungeon called The Labrynth - sadly - this one is missing David Bowie.

If you don't want to feed the Gamestop monster, you can always order from Amazon and support your favorite co-op website.  After all, we brought you the exclusive footage of the game's co-op mode.