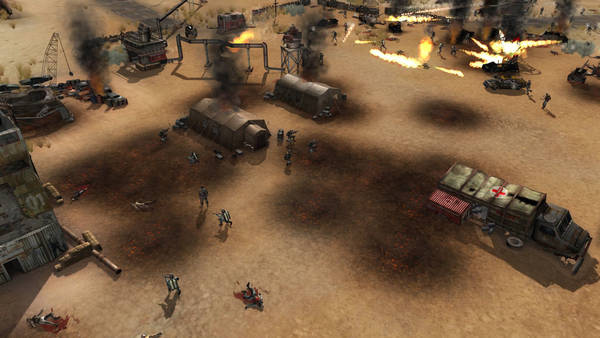 Gamers should get a kick out of the post apocalyptic PC title APOX, if for not other reason than the seamless blending of two co-op favorite genres. APOX takes the real-time strategy elements we love like resources, base-building, and strategy (also fast paced battle, duh) and blends those elements with individual unit commands that you might see in a Shooter. Things like using cover, raiding bodies, or getting in and out of vehicles, all blended seamlessly.

We also learned something interesting about the inclusion of co-op when an official post on the  APOX forums mentioned players were actually having more fun playing the "versus" mode against bots during testing.  Because of this, the team wanted to include a dedicated co-op option.  If you need a challenge you feel you can only gain from playing against human players, play with 16 human players against 16 "hard" bots and you're set for some solid comp stomp co-op action.

That bit of backstory uninteresting to you? How about the cold hard facts about the games features from launch?

After you’ve taken in all the features of the game - taking special care to notice the comp-stomp co-op included in the “key features” list, head over to Steam to take advantage of its sale price of $9.99 (from $14.99). If you want to make sure the game will run, here are your system requirements.