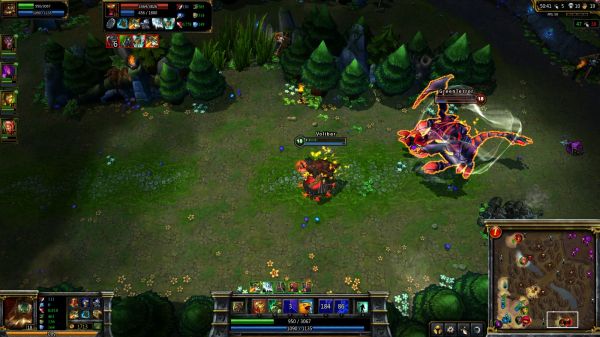 League of Legends developer Riot Games have announced a brand new game more for their game featuring co-op play.  League of Legends is based on, and developed by some of the team that create a mod for Warcraft 3 called Defense of the Ancients.  This psuedo RTS/RPG hybrid features a champion character that summons creatures, uses spells and items, as well as other ablities to conquer opposing champions.  The game is as much strategy as it is action, and loot plays a big part in the addictive nature of the gameplay.

While the game has traditionally been about PvP, or player versus player, the developer is adding a dedicated co-op mode to the game.  The game already supports AI bots in a smaller capacity for training, practice and comp stomp co-op.  The Co-Op Vs AI mode features more difficult AI opponents than already exist, as well as a dedicated lobby to find other co-op gamers.

There's no word yet on how many players will be supported in co-op, but the regular modes support up to 10 players - 5vs5 - so we assume the co-op will support this as well.

While the patch isn't live yet, the game received an update today to prepare for the impending Co-Op mode.  We should see the co-op patch in the coming weeks.  We've reached out to Riot Games for a date or timeframe for the patch, but haven't heard back yet.  We'll let you know as soon as we do.