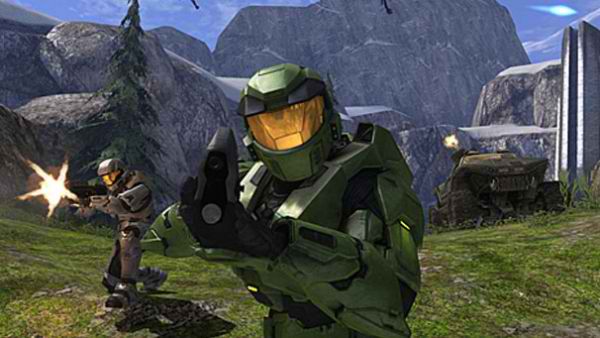 Joystiq.com shed a little light on the worst kept secret in the gaming industry today.  Halo: Combat Evolved, the "killer app" for the original Xbox, is getting a remake.  Sources confirmed to Joystiq.com, "...the re-release is not Bungie's 2001 Xbox game simply running at a higher resolution -- it's being remade with new art assets."  It appears Halo is getting more than just a high-def polishing:

The Halo: Combat Evolved update... is expected to support 1080p resolution and 3D televisions. Details on multiplayer are supposedly still being worked out, but we understand the remake will likely feature online co-op (the original game supported two-player split-screen co-op).

That better not mean they're leaving out split-screen co-op.  Split-screen, followed by split-screen with online play, has been a staple of the Halo franchise.  We'll be watching the co-operative development closely.

The game is rumored to be developed by Saber Interactive.  Funny.  I thought Saber only made easily combustible printers.  -I just received a note telling me that Saber Interactive is in fact a real company based out of New Jersey, and they have no relation to the fictional Sabre company from "The Office." That's a relief.

The new/old Halo is predicted to hit store shelves on November 15, 2011, the ten year anniversary of the original's debut.  This puts it right in thick of things with Gears of War 3 and Call of Duty: Modern Warfare 3. Should be an interesting holiday.  An interesting holiday that's going to cost me about 180 bucks, plus tax.