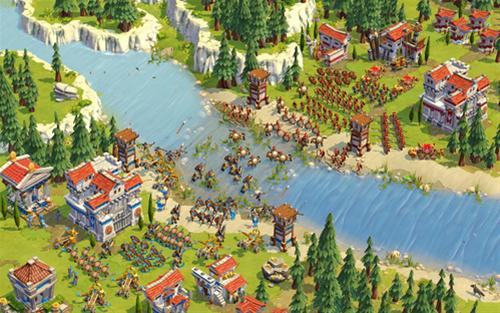 The MMO playing model has moved away from a lot of the pay-to-play aspect - that is to say, they’ve been largely moving away from the monthly subscription fee. Instead it looks like games like the upcoming Age of Empires Online will only cost money if you really want that premium experience. Players of a casual persuasion and the hardcore crowd will be able to play together to complete the games co-op quests in an MMO/RTS environment, all without restriction.

[Age of Empires Online] shares many real-time strategy elements seen in previous Age of Empires titles, and borrows elements from MMORPGs, allowing players to earn experience and gear via quests or crafting systems.

Your goal as an individual player is to build up your civilization in real-time. Your civilization will continue to earn money while you’re offline, and you’ll complete quests (in co-op if you so choose) to earn new loot and upgrades for your civilization. Gamasutra reports that over 90% of the quests in Age of Empires Online are playable in co-op.

The only time money is part of the game is when you either choose to build a “premium civilization” through a purchased upgrade, or through microtransactions if you just happen to see an item pack in the games store you wish to own in-game. This “real money” will go toward keeping the game up and running long-term the way a subscription would, only it’s optional.

We don't want to nickel and dime you; we're trying to build a community. We're not just trying to sell you a product. We want to have something that's living and growing moving forward.

We can look forward to this free-to-play community based game on PC (Via Games of Windows LIVE) later this year.