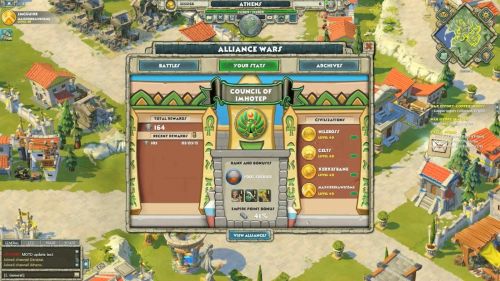 Back in April we mentioned Age of Empires Online would be switching to a new currency system called Empire Points. Before, premium content could only be purchased for specific real-world prices and that was it. Empire Points, however, can be either purchased with money or earned in-game by completing in-game tasks and by participating in the new Alliance Wars. This month's Summer Update has gone live, making active the Empire Points system as well as a host of new features and changes.

Choose your side and take part in the Alliance Wars! This brand new, level 40 end-game contest will test your skills against other Age of Empires Online players. You and your Alliance will compete with other Alliances, earning Empire Points along the way!

The Alliance Wars include:

If you’re already level 40, the Alliance Wars will be available immediately after the update.

Now you can outfit your favorite Age of Empires Online units with unique vanity gear! This gear will override the appearance of your regular equipment. There are special vanity Helm, Shield, and Weapon slots. Which will you try first, the Fish Sword or the Pumpkin Shield? Do you want unique civ-specific Heroic gear? You decide.

Having difficulty with a quest? Purchase an Empire Consumable from the Empire Store! Usable from level 1 and without any Age restrictions, these provide the necessary firepower to crush even the fiercest of foes.

With this update, the campaign core AI has been updated to account for the new Tech Tree. Many of the AI changes were straight forward and mechanical, simply allowing the AI to use the new content. However, we have also done a full pass to address quest difficulty and our wide range of player skill levels.

Check the official blog for the full patch details. Note that the update inadvertently boosted the game's difficulty to stressful levels, resulting in boatloads of players complaints. The developers quickly responded by dialing the enemy AI's abilities back a bit and will continue to monitor and address difficulty issues in the future.

Age of Empires Online is a free-to-play online game that supports 2 player online co-op. Check out our co-op review for full details, and then stop by Xbox.com or Steam to download the game.