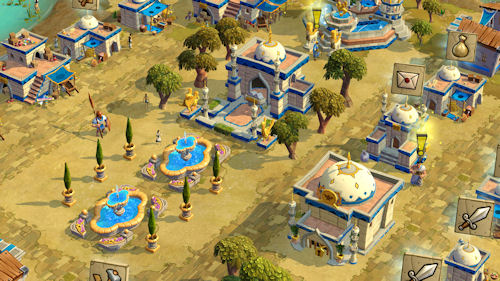 Age of Empires Online has added its first major race, the Persians.  With this premium content you get immediate access to level 20 in the game.  The Persians have all custom units, a new tech tree, and all unique architecture and unique gear.  This makes them play completely different than the Greeks or Egyptians that were part of the free base game.

Travel east as you command the Persians, one of the most powerful empires in ancient times, who controlled much of the known world and influenced culture around the globe. Battle with unique units such as the Immortals, mounted Persian Archers, and special attack elephants. Uncover new unit gear and Advisor cards. Single player and PvP battles await!

Legendary Quests and Gear! Your journey continues at level 40! Marshal your forces to face some of the toughest quests in the realm, with new challenges and new Legendary gear. Only the best will be victorious! Legendary features include:

Free crafting app now available on Windows Phone! That’s right, now you can continue to build your empire while on-the-go! Use your Windows Phone to become a crafting expert in Age of Empires Online: