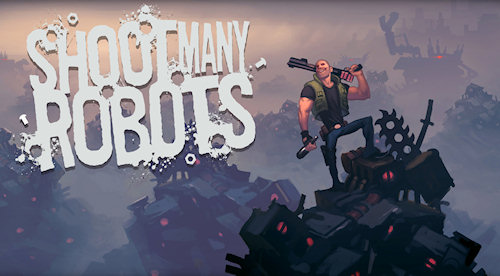 Demiurge Studios have announced their a brand new original title today called Shoot Many Robots, the Boston area developer had previously contributed work to games like Bioshock, Mass Effect and Borderlands.  Shoot Many Robots is a side scrolling four player co-op shooter where players...kill toasters.  Well not just toasters, but lots of robotic enemies both big and small.

From the press material the game really seems to have a strong focus on cooperative gameplay, touting players working together during a chaotic robot uprising.  With Watson's recent found success, the real uprising can't be far off.

“Shoot Many Robots is the dream game we’ve always wanted to make: a 4-player co-op action-RPG with tons of loot and great innovation on beloved run-and-gun game play. "

The first trailer for the game reveals an over the top style with plenty of comedic relief.  No platforms have been announced yet, only that the game would be available for digital download in 2011.  We're going to guess you'll at least see a PC version of the game.