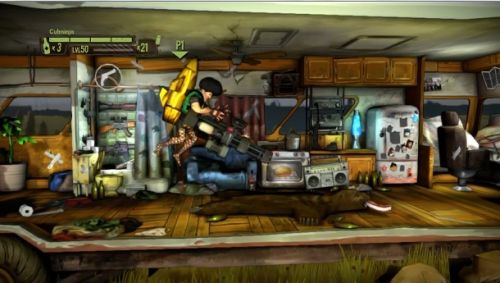 That's me, P. Walter Tugnut. Well, my version of Mr. Tugnut. I'm just cruising around my RV with my golden jet pack, sad and alone. My pink hair pick brings little joy to my supafly afro of gloom. My toned calves look magnificent in my fishnet stockings, but there's no one around to compliment them. I do have a giant mini-gun to keep me company, but alas, I've grown weary of her limited supply of ammo. You see, all my friends have gone to bed. I'm a West Coast gamer with an East Coast friends list. I wanted to Shoot Many Robots, really I did. When playing solo I'm right at the crossroads of "too badass for Hard mode" and "too candyass for Insane mode." I need to unlock more powerful guns so I can shoot tougher robots, because they're the ones that drop the best guns. It's a vicious cycle. I refuse to pay five real dollars for "Edwin the Automatic Shotgun," but what does it say about me, if I'm willing to grind for hours to get it? It says my time is worthless, that's what. On that note, I could think of no greater waste of time than playing with random players late at night over Xbox Live, so what the hell, I decided Shoot Many Robots with strangers. Just three half-naked rednecks sportin' afros and one dude with his head on fire. Nothing to see here.

I jumped into a game and found myself on a boss level on Insane mode. Great. Let's do this. Usually, when I play on Insane mode, I die a few times and then politely excuse myself from the game, or rage quit using as much profanity as possible.  It depends on what feels right. I had recently changed my build and realized that I didn't pack much of a punch, but I could take a few hits. I waded into the fray of angry metal and revived a fallen Tugnut. Hooray, I was helping! When I briefly spoke with a few developers of Demiurge Studios, the makers of Shoot Many Robots, I asked them what most people would miss if they casually approached the game. Without a pause they said "Insane mode," and they're right. Most people won't play at this level, which is a shame, because it's amazing with a well-equipped co-op crew, even one made up of strangers. Nuts rain down from the sky as the air is filled with bullets, rockets, grenades, and all sorts of robot body parts. It's incredibly more chaotic than normal mode, and markedly more difficult than the "Hard" setting. I'm the guy doing the Charlie's Angels pose. No one would do it with me.

My team was, for lack of a better word, awesome. We managed to stick together, and to heal each other when one of us would end up on the wrong end of a chainsaw or missile. I managed to only get killed twice, which is pretty good for me. The whole team was only wiped out once, but that's why devs make checkpoints. I loved producing five digit critical hit numbers. I wasn't that powerful compared to the others, but damn, hitting 20k for damage feels so good. This was easily the best time I've had on the Insane difficulty setting, and I was earning some sweet loot, as well. The big yellow critical hit numbers usually indicate that everything is dead... The level culminated in a simple boss fight. I know a boss fight is going to be quick whenever somebody brings a pet carrier full of dynamite to the show. In this instance, we had two. You may remember that I mentioned "Fluffy's Revenge" in our Co-Op Review. It's basically a big screen-clearing bomb. I had experienced early success with the weapon on the Normal difficulty levels, but it had lost some of its oomph in the Hard stages. I don't know if my teammates were using a new and improved version or if they had just built themselves into explosive experts. "Fluffy's Revenge" unleashed hell on that boss. I felt sorry for it.

We declared victory and were whisked away to the RV. Before we could check our spoils of robot war we were greeted with the Shoot Many Robots scoreboard: I wasn't surprised to see that I didn't have that many kills. Insane mode is all about equipping high level gear, and I only had a few choice pieces. I did manage to pick up three new max level items on this adventure, so overall it was a successful session of gaming with strangers. I said thanks, out loud, although I knew no one could hear me. None of us had mics on. I think they were all gaming with strangers, too.