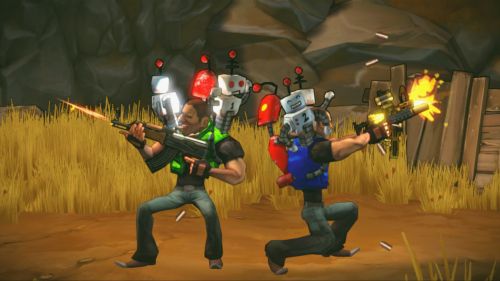 Today we're proud to announce that the Co-Optimus site mascots of Billy, Player 1 Bot and Player 2 Bot are all going to be featured in the upcoming 4 player co-op game, Shoot Many Robots.  With a title like Shoot Many Robots you may fear for the life of our co-op buddies, but don't worry folks - Billy and Friends aren't going to be the target of P. Walter Tugnut's machine gun fire.  Instead they'll be firmly strapped to his back as a bonus item to help in anyway they can.

We are super excited about the game and obviously incredibly honored to be featured in it.  We felt the co-op nature of Shoot Many Robots was a perfect fit for our site, Billy was obviouslly overjoyed when we told him.

So what exactly do Billy and Friends do when equipped?

You can never have too many heads.

We'll have more details in the coming months on how you'll obtain them, but for now we've got a handful of screenshots and a video of Billy and Friends in action.

Shoot Many Robots comes to Xbox Live Arcade, PlayStation Network and PC next year with four player local and online co-op play.  The game is being developed by Demiurge Studios and published by Ubisoft.  You can check out our hands on preview with the game right here.