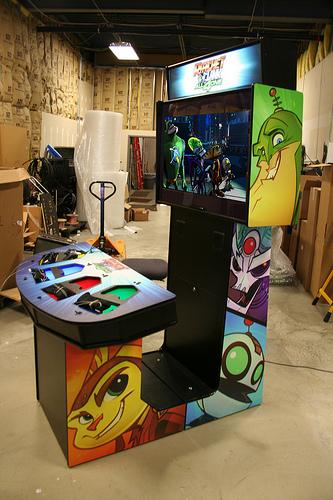 As one of four, some of my oldest co-op memories are playing 4 player arcade games; the intense and tiny racing action of Ivan 'Ironman' Stewart's Super Off Road, or the mad scramble for The Simpsons Arcade machine, as we all try to avoid playing as Lisa.  There is something to be said for the close proximity of four players all stood around together - and I don't mean just the smell.

Those of you lucky enough to be at this year's Comic Con San Diego (happening right now) have the chance to re-enact your childhood with the awesome bespoke Ratchet and Clank: All 4 One Arcade.

The cabinet is housed in the Playstation section of the Con and has a 40 inch 3D screen.  Unfortunately, there are no old school joysticks and buttons to mash, but you do get to use eerily light DualShock 3's instead.  Other Playstation co-op games are also at the Con including; Resistance 3, Uncharted 3, Twisted Metal and Starhawk.  All these games have panel sessions so check them out: