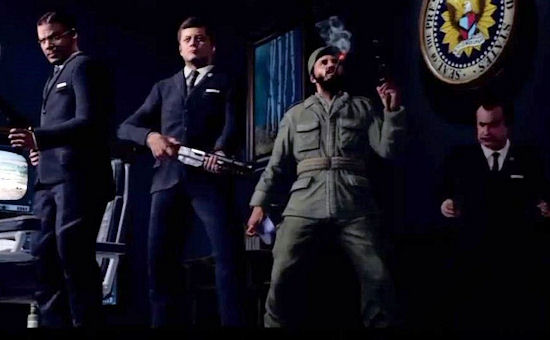 If you haven't beaten the single player campaign in Call of Duty: Black Ops - you'd only have one zombie map at your disposal for the four player co-op survival mode.  If you didn't take the time to explore the menu area of the game, you'd also be missing out on the game's other co-op mode - Dead Ops Arcade - a top down shooter.  Lucky for you, this weekend Activision is unlocking both of those options for a limited time.

DOA, or Dead Ops Arcade puts you and up to three other soldiers in a pursuit of the Cosmic Silverback; tracking him through a gauntlet of arenas filled with traps, treasure and waves of flesh-hungry zombies.

Five features four significant real-life figures from the Cold War era: John F. Kennedy, Robert McNamara, Fidel Castrol and Richard Nixon. They are all meeting in the Pentagon when zombies break in and start attacking.

After the weekend in over, things will go back to normal.  But don't worry, unlocking Five is as simple as beating the game.  Dead Ops requires a bit more work - but here's the scoop on how to do it.

From there head to the back of the room and find the small terminal computer.

You can also enter ZORK to launch the classic text adventure, Zork.