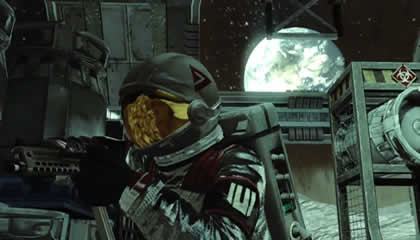 The Zombies lore of Call of Duty: Black Ops has come a long way. Adding more difficulty and more personality with each map pack, Treyarch has built a legend within a legend - a game mode that will be talked about for years, and a backstory that most gamers love to play over and over again.

But crafting this alternate history is the fun part...the challenge for Treyarch is how to keep people coming back for more. The very first Zombies map was incredibly fun for what it was; but obviously it's not varied enough to entice gamers to purchase ongoing downloadable additions. Luckily Treyarch is very, very creative.

When World at War was unseated by Modern Warfare 2 it had four very solid and enjoyable Nazi Zombies maps. Black Ops' Hardened and Prestige editions included these four straight out of the box, along with two new maps that tied the originals into the Cold War setting of Black Ops. Two subsequent map packs would add two more Zombies maps, and now the Rezurrection pack not only brings the original four to the core versions of Black Ops...it also adds yet one more, for a total of nine Zombies maps.

That's a lot of Zombies. And it has required a lot of ingenuity on the studio's behalf. So how have they fared, nine maps later? The newest map is called Moon. By far it is the most difficult Zombies outing yet, at least for me. To start, you have to survive 45 seconds in a tiny area while the central transporter powers up. This sci-fi inspired platform will zap you all to an abandoned moon base, if you survive the initial surge of zombies and hellhounds.

Once there, you have about ten seconds to get to a supply closet and equip a life support suit, or you'll run out of air. Then the experience gets very stressful, and very interesting. To begin with: you're stuck with your pistol unless you unlock either of two doors to access some basic medium-powered weapons. The conundrum is that opening the doors adds more points of entry for the undead. If you feel brave, you can continue away from that central room and into the depths of the moon base. Eventually you'll find yourself fending off zombies on the moon's surface. To say that this map is different from the anything you've every seen before would be an understatement.

The lower gravity of Moon is not just a bit of a game-changer (as your movement will have to be adapted to it) but it also adds an element of immersion. When killed, zombies will float away instead of simply falling. Also, a suited figure will sometimes show up in the map; this figure looks exactly like one of your co-op partners, except that the name is a randomly chosen one from your friends list, and it's displayed in red. It's a jarring sight the first time you come across it. Getting too close to this roamer will grant you a vicious headbutt, and killing it (which takes quite an effort) creates a shockwave that blows any nearby players backward. The low gravity is not your friend when this happens; you may find yourself floating down into a waiting hoarde. It's a no-brainer to say that this is a worthwhile download at the low cost of free. But since the Rezurrection pack is available to two different crowds at two different prices ($15 USD for those with the regular edition of Black Ops; only free to those with the Hardened or Prestige editions), deciding if this is a worthy purchase is a touch choice.

Fortunately for me this isn't a review, and I don't owe anyone a "yes" or "no" bottom-line answer. Just know that I've had fun with Moon and I'm glad to still be playing fresh Zombies content. Beyond that, it's just one more solid addition to by-and-large the same experience.