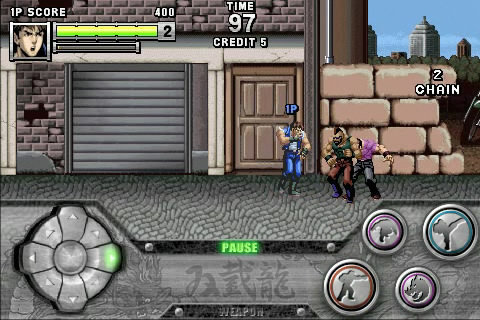 Everything old is new again, it seems.  Retro remakes are all the rage right now, and with so many different systems to release on, anyone can have easy access to the classics of yesteryear.  One such vintage powerhouse coming to a phone near you is Double Dragon.  If you're not familiar with Double Dragon, stop what you are doing and read the Co-Op Classics article covering it; it's one of the most influential games of all time, particularly from a co-op standpoint.  A few years back, Billy and Jimmy made their way onto XBLA, and next month, they're headed to iOS devices.

This port will be known by the super-descriptive title Double Dragon iPhone, and features a slick visual remake as well as the ubiquitous touch screen controls.  Other changes include new bosses and combos, remixed tunes, and best of all, co-op multiplayer via bluetooth.  No word yet on a price, but it's probably worth at least a roll of quarters, right?